Davido took to Twitter to post about the new house he got in Banana Island with money made from singing about "banana falling on someone". The house, located in the exclusive highbrow area of Lagos, features a private lift, something the singer says he's always wanted. After […] 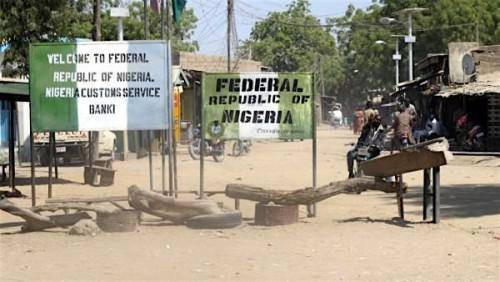 About 1,111 irregular migrants have been refused entry into the country in the last two months following the joint border operations by the Nigeria Immigration Service and the Nigeria Customs Service.  The Comptroller General of Immigration Mohammed Babandede, who disclosed this in a joint briefing in Abuja said 728 migrants have also been removed from the country since August 20 when the operation began.  He said: “Before this operation, people enter into the country in and out. But this operation has enhanced the ECOWAS rule on entry and exit of persons.“We have refused entry for 1,111 people who do not have the right travel documents to enter Nigeria. Among the 147 people we have arrested, many are not even citizens of ECOWAS states.“We have arrested Pakistanis and North Koreans; we have deported seven and processing deportation of the others. 728 who have entered into the country have been removed,” he explained. Also speaking at the press conference, the Comptroller General of Customs (CGC), Col. Hameed Ali (Rtd) debunked claims of the exercise hindering the fundamental right of movement.  “When it comes to security, all other laws take a backseat. Nigeria must survive first then we can begin to consider your rights.“As it is in the last report, our consumption of petroleum products has reduced by 10.2 million litres which means that has been continuously been smuggled to our neighboring countries."Goods worth N1.43 billion had been seized while operatives had arrested 317 suspected smugglers and 147 illegal migrants, seized 21,071 bags of foreign rice, 190 vehicles, 891 drums of petrol, 2665 can of vegetable oil, 66,000 litres tanker of vegetable oil, 133 motorcycles, 70 cans of petrol and 131 bags of fertilizer used for making explosives.“As a result of this closure, Niger Republic has already circulated an order banning exportation of rice in any form to Nigeria,” Ali said. The post 1,111 irregular migrants refused entry into the country in 2 months – FG appeared first on Linda Ikeji Blog.

A firm called BioShield Distribution is offering a product called the 5GBioShield, which “provides protection for your home and family, thanks to the wearable holographic nano-layer catalyser, which can be worn or placed near to a smartphone or any other electrical, radiation or EMF emitting […]