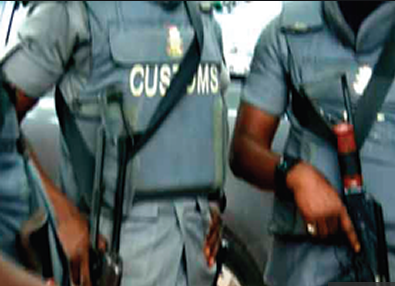 A 20-year-old secondary school student has been killed after a Mercedes Benz ML rammed into a group of people. The vehicle had been intercepted by men of the Customs Service in Ogun State, from smugglers, before the incident. Customs Public Relations Officer, Abdulahi Maiwada, who confirmed the incident, said it happened when students of the Ojumo Community Secondary School were closing from school.   According to him, three others sustained injuries. “Officers of the Nigeria Customs Service Ogun Command on routine patrol intercepted a vehicle (Mercedes Benz ML) suspected to have been smuggled into Nigeria,” he said.“In the process of conveying the said vehicle driven by an Officer of the Service fully escorted by official patrol vehicle, an okada man conveying a passenger crossed their path.  “In a swift response by the driver to avoid collusion with the Okada rider, he lost control and rammed into some group of people coincidentally on a market day of Ihumbo Community.  “Unfortunately one of the victims, a 20-year-old student of Ojumo Community Secondary School named Opeyemi Odusinan, instantly died and three people sustained various degrees of injuries.”According to the statement, two of those injured have been discharged from the hospital with the third person, identified as Sunday Adeniyi, is still receiving treatment at the General Hospital Idiroko. The command expressed its condolences to the family, school and friends of the deceased.  It also prayed that God grants them the fortitude to bear the ‘irreparable loss’.The post 20-year-old secondary school student killed after customs seize cars from smugglers in Ogun State appeared first on Linda Ikeji Blog.