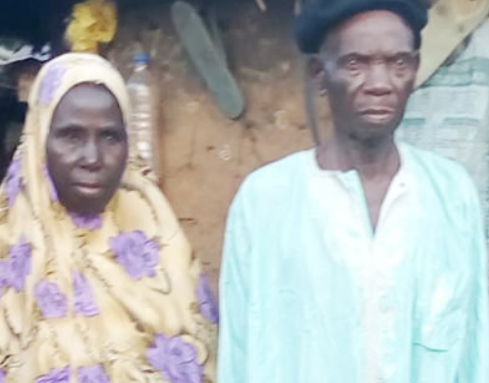 Piri village in the Kwali Area council in Abuja was recently in a celebratory mood as 96 year-old Pa AbdRahman Munse-Bwaye got married to his lover, 73 year-old Rukaya Yamwa-Piri, on October 17th. Pa Munse-Bwaye was a widower before he met Rukaya, fell in love with her and decided to make her his wife. In a chat with NAN, Pa Munse-Bwaye who is the oldest man in Kiyi village in Kuje Council Area Abuja, said despite the fact that he had grownup children who had wives that took care of him, he wanted his own wife as no woman would be able to take care of him like his own wife. According to him, many people tried to talk him out of getting married again but he decided to stick to his decision as he loved Rukaya so much he wanted her as a wife. Pa Munse-Bwaye’s first wife, Hajia Zainab Godobe, died in 2008.“Though, I married a widow, Salamatu, after my wife’s death, her children took her away some years ago leaving me without a wife, hence, I asked Rukayah to marry me and Allah made her to accept, I am very happy.’’ he said On her part, Rikaya expressed joy at getting married to a gentle man like Pa Munse.   The post 96 year-old man weds his 73-year-old heartthrob in Abuja (photo) appeared first on Linda Ikeji Blog.