Cristiano Ronaldo took to Twitter and Instagram to show off his new hairdo and he asked his followers' for their opinion. The Juventus star player, who has changed his hairstyle several times throughout his career, shared a photo of his new hairstyle with the caption: "Approved?"  His followers […]

African Tour Concert director, Konjo Leyla, has said multiple award-winning Nigerian singer Davido is the king when it comes to overall African music. Konjo, who stated this in an Instagram live chat, added that it is too early to crown Burna Boy because he still […]

A father of seven in Kamurojjo-Muro village, Serere district, Teso sub region, Uganda has been stoned to death for allegedly stealing food. The deceased identified only as Emuron was accused of stealing a hen from of one the neighbors, on Monday afternoon and residents descended on […] 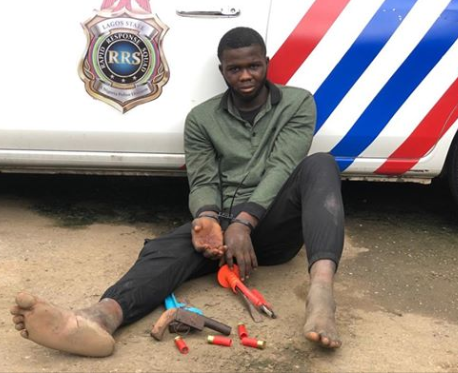 25-year-old Sadiq Yinusa, pictured above, has been arrested by operatives of the Rapid Response Squad, RRS, of the Lagos State Police Command, for attempted robbery. When interrogated, Yinusa said he went to rob at a nightclub in the Igbobi area of the state so he can raise money to secure the release of his other gang member who is currently being held at the Kirikiri prison. Yinusa was arrested at a nightclub in Igbobi while attempting to rob the club supervisor. Armed with a locally made shot gun, 4 live cartridges, a socket wrench, a chisel and a plier, Yinusa attempted to rob the night club supervisor but was apprehended. When interrogated, Yinusa said “Prince Chika, currently serving prison sentence in Kirikiri for robbery, called me last week to help him hassle around for funds to secure his freedom from prison. I have visited him in the prison a week ago and he had called me from prison to appeal for my assistance. He gave me the location of this gun and some of the arms he used.He has assured me to pay back within the first few weeks of regaining freedom. I retrieved all these arms from the bush where he kept them before heading for the operation. He told me that he bought the gun in Anambra State for a sum of N5000. Yesterday was the first day I would fire a gun during an operation. Everybody had already left the club in Morocco Road, Igbobi when I scaled the fence. I saw the supervisor, and at gunpoint, I requested for his wallet.I felt he was wasting time, so, I shot him but he dodged it and raised alarm. I was escaping when I ran into a patrol team of RRS men responding to distress noise. I was a pickpocket and a burglar before venturing into robbery. Last week, I broke into three houses in Somolu. From each of the houses, I collected two mobile phones of my victims. I also got three laptops as well as jewelry. I sold them to Adamu Jubril.Whenever, I collect ATM cards from victims, it is Korede Baki (22) that assist me in doing the withdrawals. I collected the PIN along with the ATM card at gun point.”Also arrested with the suspect were the receivers; Jubril Adamu and Korede Baki. According to Jubril Adamu, popularly called Ango, a trader in Tejuosho Market, Yaba, “I have been buying stolen items from Yinusa for over six months now. I have bought over 15 mobile phones, laptops and jewelry from him. I bought laptops from him at N30,000:00 each.”  The post I robbed to raise money to bail my gang member from Kirikiri prison- Suspect tells RRS appeared first on Linda Ikeji Blog.

Cristiano Ronaldo took to Twitter and Instagram to show off his new hairdo and he asked his followers’ for their opinion. The Juventus star player, who has changed his hairstyle several times throughout his career, shared a photo of his new hairstyle with the caption: […]

How to Help Your Kid Handle 4 Cringeworthy Situations

The 10-year-old baseball players excitedly dug into the hotel’s continental breakfast, chattering about the upcoming tournament and how far they had come. In the back of my mind, I was worried. Because we had gone much further in the tournament than expected, we were going […]

Cristiano Ronaldo took to Twitter and Instagram to show off his new hairdo and he asked his followers' for their opinion. The Juventus star player, who has changed his hairstyle several times throughout his career, shared a photo of his new hairstyle with the caption: "Approved?"  His followers […]