People who shout in church are selfish – Vector

Nigerian rapper, Vector has taken a swipe at people who believe that ”God will hear them more when they shout in church. According to the rapper, such act shows how selfish people are because they want God to answer them first. Vector tweeted; Why the […]

Princess, Mother, Actor! Dolapo Oni is the cover girl on this Special issue of TW Magazine

Media personality Marcy Dolapo Oni believes it’s the year of the mother and we couldn’t agree more, because more than ever before, mothers are opening up on all motherhood entails. She first came into our consciousness precisely ten years ago when she became one of […]

Gospel singer, Nathaniel Bassey on Monday morning appealed to Nigerians, particularly the youths, not to allow themselves slip into depression by comparing their lives to people on social media. In a post shared on his IG page, the singer stated that as a youth pastor, he […] 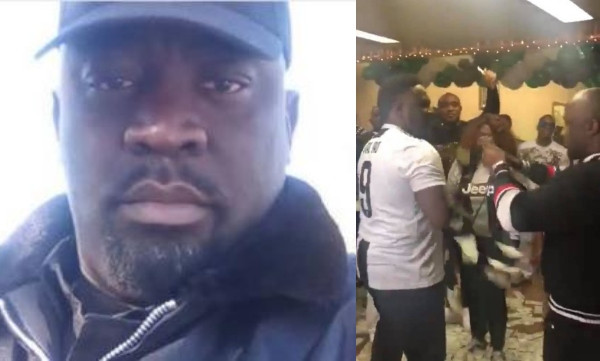 Nollywood actor, Femi Ogedengbe has reacted to the viral video of a lavish party held by one of the suspects arrested by the US' Federal Bureau of Investigation (FBI) for alleged fraud. The video captured moment the first suspect on the FBI list, Valentine Iro and his wife were sprayed with dollars at their event.  Reacting to the viral video, the actor turned security guard in the United States said the video shows what Nigeria as a country idolizes and celebrates. According to him, 90% of such Nigerians buy their way into political offices after living a life of crime abroad.  Femi concluding by stating that encouragement of sudden wealth is why the Nigerian society is stagnant. He wrote;  Valentine Iro. Number 1 on the FBI list…. This is Exactly what Nigeria as a Country Idolize and Celebrates. No more Hard work and honour… So, A few of us Nigerians that Decides to take the slow but steady route appear to them like fools….After this life Abroad, 90% End up Buying their ways to Political offices Yet we Wonder How we got here at this corss road as a Nation. The more Our Society continues to Encourage this type of sudden wealth, we will continue to be stagnant because his likes is the pool from which we now source leadership materials . Una doo! _Femi Ogedengbe Here is the video below;       View this post on Instagram         Video of a lavish party, Valentine Iro, one of the suspected fraudsters arrested by the FBI heldA post shared by Lindaikejiblog (@lindaikejiblogofficial) on Aug 24, 2019 at 5:06am PDTThe post Actor Femi Ogedengbe reacts to video of lavish party held by one of the suspects arrested by the FBI appeared first on Linda Ikeji Blog.

A man took to Facebook to accuse SARS operatives of cutting off his father's locs for no reason. Divine Michael Jackson, who lives in Port Harcourt, shared a photo of his father's hair before it was cut and another photo taken after his long natural locs […]

A few days ago the internet went agog when Bryan Okwara revealed for the first time that he is expecting a child with his longtime girlfriend, Marie Miller. Just when we were starting to get over the pregnancy news, Bryan revealed that their baby is […]

People who shout in church are selfish – Vector

Nigerian rapper, Vector has taken a swipe at people who believe that ”God will hear them more when they shout in church. According to the rapper, such act shows how selfish people are because they want God to answer them first. Vector tweeted; Why the […]