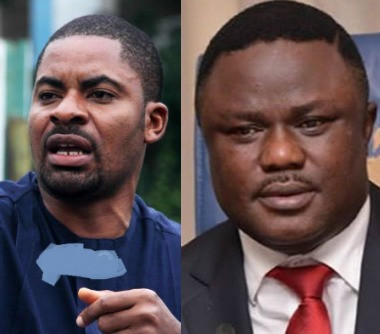 Deji Adeyanju, leader of civil society organisation, Concerned Nigerians, has asked the United States Embassy in Nigeria to impose visa ban on Cross River State governor, Ben Ayade, over the illegal arrest and detention of Nigerian journalists, Agba Jalingo and Joseph Odok. In a letter addressed to the embassy and signed by Adeyanju, the group said it believes that the illegal arrest and detention of Jalingo and Odok shouldn’t happen in a democracy. Both journalist have been in detention for allegedly writing articles against the governor.  Part of the petition letter signed by Deji Adeyanju reads“This trend of despotism without consequences will only aggravate the worsening human rights condition in the country. We write to call the attention of the United States Embassy in Nigeria to the unabashed clampdown on press freedom and freedom of expression in Cross River State.Governor Ben Ayade has declared war on press freedom and free speech in the state by randomly harassing, arresting and incarcerating activists and journalists on fallacious charges to abet his repression and persecution agenda.“We therefore beseech you to please look into these human rights violations going on in Cross River State and impose visa restrictions on Governor Ayade and all members of his family.“We trust that the United States Government will demonstrate to Nigerians, once again, as was done to those that undermined Nigeria’s electoral and democratic process in the 2019 general elections, that it is strongly opposed to human rights violations, acts of injustice and undemocratic practices by persons in positions of power in Nigeria.” The group in another petition to the National Human Rights Commission, urged the agency to commence investigation into the growing clampdown on press freedom and freedom of expression in Cross River State. The post Alleged rights violation: Deji Adeyanju petitions US govt, seeks visa ban for Cross Rivers state governor, Ben Ayade appeared first on Linda Ikeji Blog.