A throwback video of the award winning Superstar and his mom has just surfaced the internet and his fans can’t stop talking about the bond between mother and son. Wizkid has also sang of his mother on songs like “Joy” and “Mummy Mi”, and how […]

Nigerian music singer, Kcee and his wife welcomed a bouncing baby boy. Few days ago, this information got out when the singer took to his social media on Tuesday, May 2nd to make the announcement. The wife who Coincidentally, May 2nd was also her birthday […] 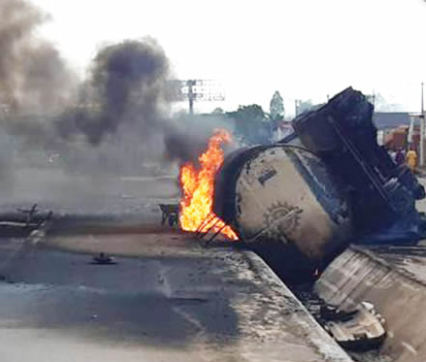 Another tanker loaded with Premium Motor Spirit (PMS) on Thursday, October 31st fell into a ditch by Chipex Petroleum Station around Upper Iweka axis within Onitsha, the commercial hub of Anambra. Emeka Obinwa, Executive Assistant to Governor Willie Obiano on State Emergency Management Agency (SEMA) Media confirmed the incident on Thursday in Awka. This comes after two incidents of Petroleum tanker accident which later caught fire were recorded in Onitsha on October 16, and18, 2019 respectively. Obinwa said that PMS was spilling out from today’s tanker at the time of filing this report, but added that the highly inflammable substance had yet to catch fire.“As we speak, there is no fire at the scene. Firefighters are seriously working at the scene, pouring water to the tanker to prevent an outbreak of fire,” he said.Also, Police in Anambra issued a statement advising residents in the area to stay clear of the area in order to prevent any disaster. SP Haruna Mohammed, the Command’s Public Relations Officer who signed the statement said Police patrol teams have cordoned off the area.   He said that John Abang, the Commissioner of Police, Anambra had visited the scene where the tanker crashed into a gutter due to brake failure for on the spot assessment. Mohammed said the tanker, which was coming from Benin was heading to Enugu with the product before the accident on Thursday afternoon.The post Another tanker fully loaded with petrol crashes in Onitsha appeared first on Linda Ikeji Blog.

Infinix Mobility has recently rolled out the new NOTE 7 series, their newest smartphone model designed for both professional and casual use in everyday life with the intent of delivering an overall enhanced experience to consumers. Among all the key features on the NOTE 7, […]

Epic has been on a roll lately. The company’s impressive Unreal Engine 5 game demo and indie-friendly licensing were universally praised by developers, while on the consumer side its GTA V giveaway on the Epic Games Store has been so popular it nearly choked the […]

A throwback video of the award winning Superstar and his mom has just surfaced the internet and his fans can’t stop talking about the bond between mother and son. Wizkid has also sang of his mother on songs like “Joy” and “Mummy Mi”, and how […]