A Chinese man who was kidnapped 32 years ago when he was a toddler, reunited with his parents on Monday, May 18, thanks to facial recognition technology. He was a toddler when he was abducted from a hotel and sold to a childless couple. Mao Yin was just […]

Former YBNL singer, Viktoh has narrated how he was treated badly by close friends to the point where he felt like killing himself. The music star who has been Missing In Action for a while now took to his Instagram page on Wednesday, May 20, […] 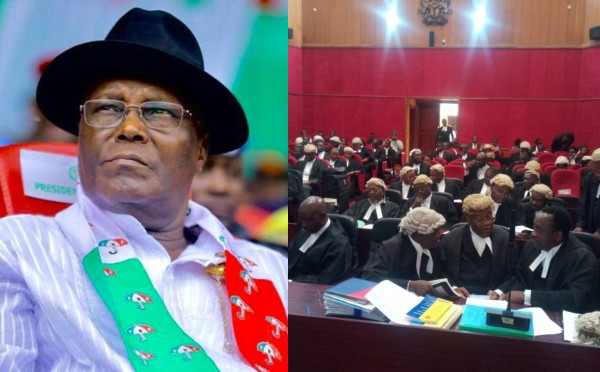 Former Vice President Atiku Abubakar and the People's Democratic Party have rejected the judgement of the Presidential Election Petitions Tribunal which upheld the election of Muhammadu Buhari as the President of Nigeria in the February 23, 2019 poll. The Presidential tribunal on Wednesday September 11, dismissed the petition of Atiku Abubakar and the PDP, saying they did not prove them beyond a reasonable doubt. Reacting to the court judgement, Mike Ozekhome who is one of the lawyers representing the petitioners, said they would “challenge the ‘misevaluation’ of critical evidence in the judgement.” “That we’re appealing to the Supreme Court is as certain as death,” the Senior Advocate of Nigeria said. The PDP on the other hand, released a statement in which they described the court judgement as provocative, a subversion of justice and a direct assault on the integrity of the nation’s justice system. The party expressed shock that the tribunal failed to point to justice despite the “flawless evidence laid before it, showing that President Buhari was not only unqualified to contest the election but also did not score the majority of valid votes” at the polls. “The PDP finds as bewildering that a court of law could validate a clear case of perjury and declaration of false information in a sworn affidavit, as firmly established against President Muhammadu Buhari, even in the face of incontrovertible evidence.“The party is also rudely shocked that the Court took over the roles of the respondents’ lawyers who clearly abandoned their pleadings by refusing to call evidence in defense of the petition.“The court raked up all manner of excuses to make up for the yawning gaps occasioned by the total absence of any evidence from the respondents.“Nigerians and the international community watched in utter disbelief when the tribunal ruled that one need not provide a copy or certified true copy of educational certificate such individual claimed to possess, contrary to established proof of claims of certification.“The party notes as strange that the court even went ahead to provide rationalizations in favour of President Buhari, even when all hard facts before it shows that he did not possess the claimed educational certificate and that the Army was not in possession of his WAEC certificate as claimed in the affidavit he deposed to in his Presidential nomination form.“The PDP also described as shocking that the court approved the flawed declaration of President Buhari as the winner of the election despite evidence to show the perpetration of illegalities, manipulations, alterations and subtraction of valid votes freely given to Atiku Abubakar by Nigerians.“Indeed, the pervading melancholic atmosphere across our nation since the verdict is a direct indication that the judgement has not fulfilled the desires and expectations of Nigerians.“The PDP however encouraged Nigerians to remain calm and not to lose hope or surrender to despondency or self-help, as our lawyers are upbeat in obtaining justice at the Supreme Court,” the opposition party said.The post Atiku and PDP reject verdict of tribunal, head to Supreme Court appeared first on Linda Ikeji Blog.

Nollywood Actress, Adesua Etomi-Wellington has revealed her disdain for the popular yoruba soup, Gbegiri. Gbegiri Soup is a very popular Nigerian beans soup. Gbegiri soup is best enjoyed with Tuwo or Amala and Ewedu Soup. However, while Adesua admitted peer pressure made her consume the […]