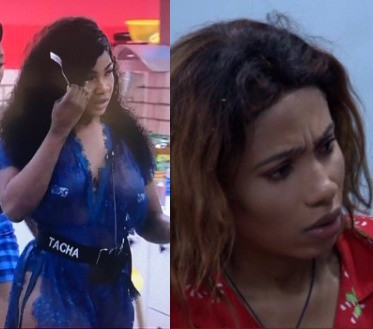 BBNaija housemates, Tacha and Mercy have both been issued strikes and warning for inappropriate behaviour displayed during the ongoing fourth season of the reality TV show, Big Brother Nigeria Two weeks ago, Mercy was issued a warning for damaging Big Brother’s property and as a result, got the long talk on why being Biggie’s guests involves them being of their best behaviour. Last night, she tried to physically harm her love interest in the house, Ike, during their lovers’ fight and for this, she broke Biggie’s rules and was issued a strike. Two more Strikes and she’ll be automatically disqualified from the Big Brother House. Tacha on the other hand was issued a strike for being disrespectful to Big Brother. In Big Brother’s House, when you are called and you do not respond immediately, this is counted as disrespect. Also, when called and instead of responding immediately, you whisper a sly comment, it is counted as disrespect. As a consequence of her disregard and insolence towards authority, Big Brother issued Tacha her second Strike in the game. Big Brother found her guilty of disrespect as well as undermining the world of Big Brother. For her continuous disrespect and rudeness to the Authority, like when asked ‘why’ and thinking it was witty to describe the letter ‘Y’, Tacha was issued her second Strike. She will be disqualified from the show if she gets another strike.  The post BBNaija: Tacha, Mercy receive strikes from Biggie appeared first on Linda Ikeji Blog.