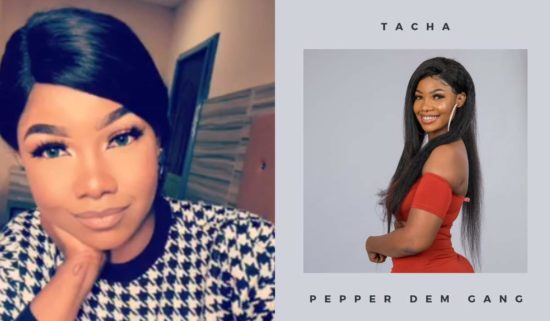 The ninth week of the BBNaija 2019 Season 4 will see Tacha, Venita, Esther, Frodd and Sir Dee battling to remain in the house after Ike replaced Omashola with Cindy.

Just as Esther, the Head of House for the eighth week, was saved after her team lost at the nomination challenge, Khafi, who is taking up the mantle of leadership after the exit of her love interest, Gedoni, escaped eviction as she would be enjoying the Head of House privileges.

Though Tacha would be enjoying some of the privileges with Khafi, the confident social media influencer would still have to hope her fans continue to vote for her.

For the ninth eviction night, Tacha, Venita, Esther, Frodd, Cindy and Sir Dee are all up for eviction. At least one out of the seven housemates would be evicted through the viewers’ votes.

The eviction list was announced on Monday night, August 26, 2019, a night after the eviction of Jackye and Gedoni.

For the eviction list, housemates had to battle for five minutes. The challenge was the Cotton ball challenge. Three representatives were selected by each team to partake in the challenge on behalf of other team members. For five minutes, each representative was to move as many cotton balls as possible from the cotton balls buckets to the plates on the floor. The team with the most cumulative cotton balls in their plates won the challenge. The Enigma team, which had Seyi, Elozonam and Cindy represent them won The Legends team, which had Venita, Omashola, and Esther representing them.

The post BBNaija: Tacha, Venita, Frodd, Cindy are all up for eviction appeared first on .