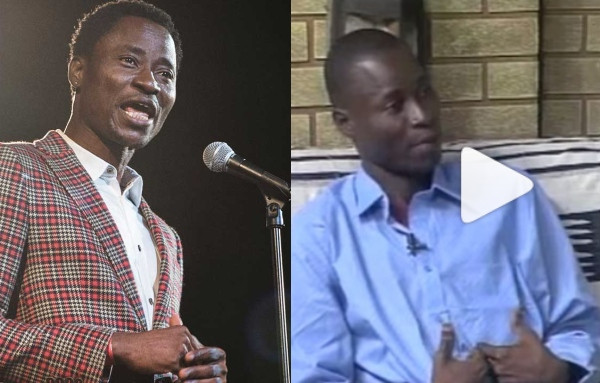 Bisi Alimi couldn't hold back his happiness as he took to Instagram to celebrate 15 years of coming out as a gay man in an interview with ace broadcaster, Funmi Iyanda.  According to the gay rights activist, its been 15 years of many ups and many downs, laughter and tears, love and hate and also an experience that has shaped his life beyond what he could have ever imagined.  Bisi Alimi thanked everyone that has supported him through the journey of opening up on his sexuality and he further stated that he doesn't want to marry a woman because the society wants him to.  He wrote;  I woke up this morning in my hotel room in Basel, Switzerland pretty overwhelmed. I can’t for the life of me believe it is 15 years ago today that I sat on that sofa with Funmi Iyanda on New Dawn with Funmi, and did something that shocked Nigeria.It has been a 15years of many ups and many downs. Of laughters and tears. Of love and hate. The last 15 years has shaped my life beyond what I could have ever imagined that morning when I uttered the word “I don’t want to marry a woman cos the society wants me to”. I look back many times and say, maybe if I haven’t, I could still be in Nollywood now, married with kids. Maybe if I hadn’t, I would be pulling millions of followers on social media and having many endorsements, and hosting shows in Nigeria.But I did.I did and it came with a price. A very scary one.I am here in Basel cos I did. I went to the White House and met Obama, cos I did. I spoke to sold out conferences, halls and schools cos I did.I call many celebrities and amazing people around the world as my friend cos I did.I married the most amazing man in the world, cos I did.Coming out has thought me everything has a price, and I am happy that while it might have cost me tears, doubts, agonies and pains, it has also shown me that life is beautiful and being honest, authentic and real is the biggest gift you can give yourself.To everyone that has made my life amazing and beautiful, I just want to thank you.To all the people that accepted me into their inn and made me a member of their family, thank you.To everyone that believed in this crazy, weird abs extremely opinionated poor from Mushin. I say thank you.Here is to the next 15 years. I have no idea what it holds, but I know one thing for sure, I am even going to be a badder badass homosexual with only one goal, making Nigeria safer for the misfits Here is a video of the interview below;      View this post on Instagram         On this day 15 years ago, #BisiAlimi revealed he’s #gay in an interview with Funmi Iyanda. According to him, he doesn’t want to marry a woman because the society wants him tooA post shared by Lindaikejiblog (@lindaikejiblogofficial) on Oct 6, 2019 at 6:48am PDTThe post Bisi Alimi celebrates 15 years of revealing he is gay on National TV in Nigeria, shares video of the interview appeared first on Linda Ikeji Blog.

Upcoming Nollywood actress, Fessy Okafor in a video has talked about her vagina and how she has the right to choose who she gives it to or not. The actress, in a new video, According to the actress, her vagina is her birthright and nobody […]