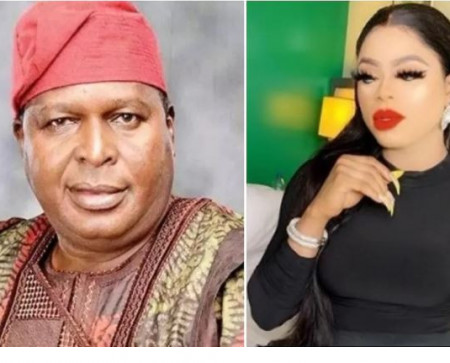 Nigerian cross-dresser, Okuneye Idris, aka Bobrisky had the perfect clap back after NCAC boss, Olusegun Runsewe tried to insult him.

Olusegun Runsewe is the Director-General of the National Council for Arts and Culture and he made a statement days ago implying that Bobrisky is a useless personality, a National disgrace who will soon be dealt with by the government if caught on the street.

”Bobrisky is a national disgrace. He started by selling and using bleaching creams, now, he has grown boobs, bums and hips. If a Bobrisky is doing well with his immoral lifestyle, how do you convince Nigerian youths to do the right thing? Bobrisky has the right, but not within the Nigerian environment.

There are others like him, but they live outside the country. If we don’t address Bobrisky as early as possible, he will form a team that will spread like wildfire. This will result in a lot of suicide cases, because the typical Nigerian parent would not want to see their child become a Bobrisky” Runsewe said in an interview

Well, Bobrisky appears not to be taking Runsewe’s comment lying low as he has fired back at him. In a post shared on Instagram, Bobrisky stated that he is ‘waiting’ for Runsewe.

”I heard someone in the Govt talked about me few days ago. Pls tell him am waiting for him. Is then he will know I roll with his boss in the government and not someone in his level. So he left other serious issue in Nigeria to address Bobrisky. But I am popular sha”.

Bobrisky turns a year older this week and according to him, he will be shutting down Lagos with his’ talk of the town’ party.

The post Bobrisky Has An Answer For Olusegun Runsewe Attempt To Come For Him appeared first on .

Nigerian music sensation, Wizkid‘s third and arguably most adored son, Zion Balogun whom he had with his manager, Jada Pollock has shown himself to be a stunt rider in a new adorable video. Zion’s dad, Wizkid who was excited about his son’s great riding skills […]