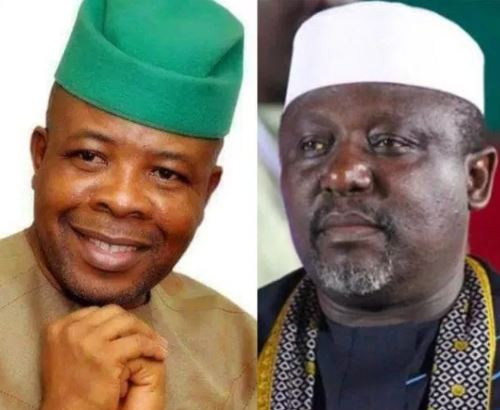 Imo state government has ordered a citizen’s arrest against Senator Rochas Okorocha, over alleged assault on a government official, Mr Jasper Ndubuaku.   The Secretary to State Government (SSG), Uche Onyeaguocha, gave the order after the Chairman of the Recovery of Government Properties, Mr Jasper Ndubuaku, was allegedly assaulted at Okorocha’s residence.  Onyeaguocha said that the state had also placed Okorocha on security watch and urged Imo citizens to arrest him and alert the government whenever they find him in the state. A video, trending online on Thursday, captured some thugs beating Ndubuaku at Okorocha’s residence on Spibatt Avenue, Owerri. READ: Imo State thug receives the beating of his life after leading a task force to invade Rochas foundation premises in Owerri (Video) The Commissioner of Police in the state, Rabiu Ladodo, and SSG confirmed the incident to newsmen at a joint news briefing in Owerri. According to PM News, the commisionner announced that a citizen’s arrest had been declared on Okorocha over the incident. They claimed that Okorocha hired thugs to attack Ndubuaku, who doubles as Special Adviser to Gov. Emeka Ihedioha on Security matters. They said that the Senator representing Imo West would be arrested and prosecuted anytime he enters the state.   This is happening barely 24 hours after traditional rulers in the state issued a stern warning to Okorocha against disrupting the activities of the recovery team. The commissioner of police said that police would investigate the senator’s involvement in the matter. Narrating his ordeal, Ndubuaku alleged that he was beaten at Okorocha’s residence and thrown into a gutter by some thugs. He further alleged that he was first held hostage for some hours by the thugs in the presence of security men attached to Okorocha’s residence. He said that the recovery team obtained a court order to search Okorocha’s house.“We got a court order to recover stolen properties kept in Okorocha’s house and when we got to his house on Thursday, armed thugs attacked us.There are twenty government vehicles in his house, four Speed Boats, one movable Crain and generator sets, which we went to recover before the incident. “We will not give up the battle, we will go back to his house because the property belongs to Imo government,” Ndubuaku said.Mr Sam Onwuemeodo, the Special Assistant on Media to Okorocha, however said the recovery committee was attacked by the former governor’s sympathisers and passersby. He said that the recovery team went to Okorocha’s house without a court order, adding that they invaded Okorocha’s residence with no fewer than 50 thugs. The post Breaking: Governor Ihedioha orders arrest of RochasOkorocha over alleged assault on a government official appeared first on Linda Ikeji Blog.