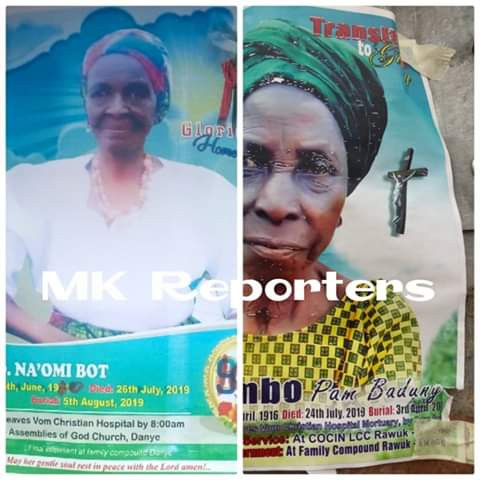 The corpse of a 109 years old woman buried in Jos, Plateau state, was exhumed after she was discovered to have been buried by the wrong family.  Mrs. Naomi Bot, died on 26th July, 2019, and was slated for burial on Monday, August 5, at Assemblies of God Church, Danye Turu village in Jos South Local Government Area of Plateau State. However, she was buried on Saturday, August 3, 2019 in place of Mrs. Kumbo Pam Badung, 103.  Mrs. Badung died on 24th July, 2019 and was to be buried near COCIN LCC Rawuk, Vwang also in Jos South LGA. Her corpse was however abandoned at the Vom Christian Hospital Mortuary, Jos where it was deposited alongside Mrs. Bot's, MKB reports. It was however not discovered until Mrs. Bot’s family relations went on Monday morning to pick her corpse for burial.  Sympathizers were already waiting at the Church and at the mortuary premises when close relations requested to have a last glimpse of her before taking her for burial. "When the hospital attendant opened the corpse after safely locking it in the casket, we discovered the corpse to be different and raised alarm,” said a family member.  Upon investigation, it was discovered that the corpse had been released and buried to a different family two days earlier.  The family however insisted on exhuming and taking it home. The family source said:  “We took their own corpse, traced the family and asked to be given back our grand mother’s corpse. They wanted to protest that their casket was expensive and therefore we should only take the corpse and leave the casket for them to bury their real relative but it was already decaying and they had to allow us take it with the casket.”  Although Mrs. Badung’s family admitted not properly inspecting the corpse before burial, the situation nearly resulted in chaos. It took the intervention of community and religious leaders to settle the disagreement.  Mrs. Bot was later buried in her ancestral home in Danye Turu nearly four hours after the official internment time.  The Vom Christian Hospital says it has resolved to sack the Mortuary attendant who swapped the corpses.  The decision was taken at an emergency management meeting summoned after the incident.  The hospital will henceforth place name tags on corpses to avert future misidentification, its Chief Medical Superintendent, Dr. Fred Dachung told MK.    The post Corpse of 109-year-old woman exhumed in Plateau state two days after being buried by the wrong family appeared first on Linda Ikeji Blog.