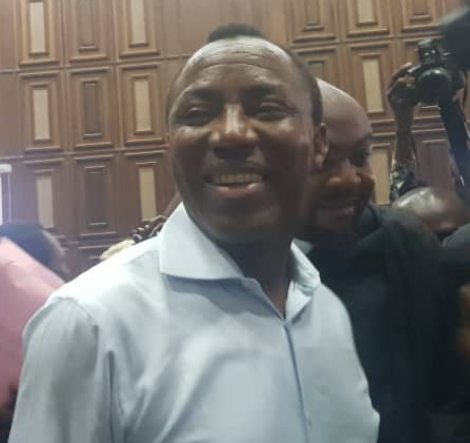 The Federal Court High Court in Abuja has ordered Omoyele Sowore, Convener of Revolution Now protest to be remanded in the custody of the Department of State Service, DSS pending the hearing of his application for bail. He's to be remanded in DSS custody alongside his co-defendant, Olawale Bakare as Justice Ijeoma Ojukwu fixed Friday, October 4th for the hearing of their bail application.   Sowore and his co-defendant were arraigned today on seven counts of treasonable felony and other sundry offences instituted against them by the DSS. They pleaded not guilty to the seven counts when read to them. After the defendants took their pleas, the defence lawyer, Adeyinka Olumide-Fusika (SAN), urged the court to allow Sowore to be allowed to continue with the bail earlier granted him by Justice Taiwo Taiwo, on September 24. He pleaded that the second defendant be granted fresh bail, but the judge said since the bail earlier granted Sowore was not predicated on the charges on which he was arraigned on Monday, a fresh bail had to be granted to him.  BREAKING: DSS Rough Handle Sowore As He Attempts To Address The Press pic.twitter.com/exgcDXOcAc— Sahara Reporters (@SaharaReporters) September 30, 2019According to her, she would have to grant them fresh bail based on formal written bail application and not oral, while directing them to file formal bail application and then adjourned hearing till Friday. The application is to be served on the lead prosecuting counsel, Hassan Liman (SAN), who indicated that he was going to oppose the application.   Justice Ojukwu had earlier dismissed the objection of the defendants’ lawyer, Olumide-Fusika (SAN), to the scheduled arraignment. Olumide-Fusika stated that the arraignment should not be allowed to go on on the grounds that the DSS, which has been keeping him in custody since August 3, 2019, had not allowed the defendants to consult with their lawyer after the charges were filed.  BREAKING: Court Fixes Friday For Fresh Bail Application Hearing pic.twitter.com/Ju8SO65k5x— Sahara Reporters (@SaharaReporters) September 30, 2019According to him, the court should protect its integrity by refusing to allow the arraignment to proceed when the prosecution continued to disobey the court order made on September 24, 2019 for the release. The prosecution led by Liman (SAN) asked the court to dismiss the objection, saying that what was more important was that the defendants had been served with the charges.The post Court orders Sowore to be remanded in DSS custody appeared first on Linda Ikeji Blog.