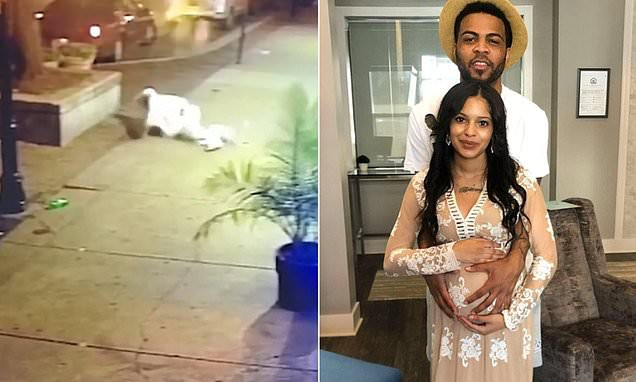 24-year-old Camryn Crowder was one of the heroes of last weekend's shooting in Dayton which left 9 people dead.  Crowder was seen in the viral video using his own body as a human shield to protect his girlfriend from gunfire after she tripped and fell while they were fleeing from the scene.  "I saw people getting hit. I literally saw them fall…" Crowder said. "I was certain that I was going to be next in line, really, at some point." As bullets flew past them, the new father jumped on top of his girlfriend to protect her from the gunfire. "I was pretty nervous," he said. "I mean, I thought for sure that it was gonna be my last day really being alive." At one point in the video, he was seen moving his girlfriend towards a section of the sidewalk that appears to be partially walled off while steadily checking to see if the shooter was still nearby. Crowder later helped his girlfriend up while they quickly escaped from the scene when it was clear.  In total, Dayton shooter Connor Betts killed nine people before he was shot and killed by police. "It was just a trail of bodies laying there," Crowder said. "I had seen about four people that had gotten hit. Laying on the sidewalk and in the middle of the street." Here is the video below;        View this post on Instagram           A post shared by The Shade Room (@theshaderoom) on Aug 8, 2019 at 12:03pm PDTThe post Dayton shooting: Man shields girlfriend from attack as Ohio gunman opens fire in unseen footage (video) appeared first on Linda Ikeji Blog.