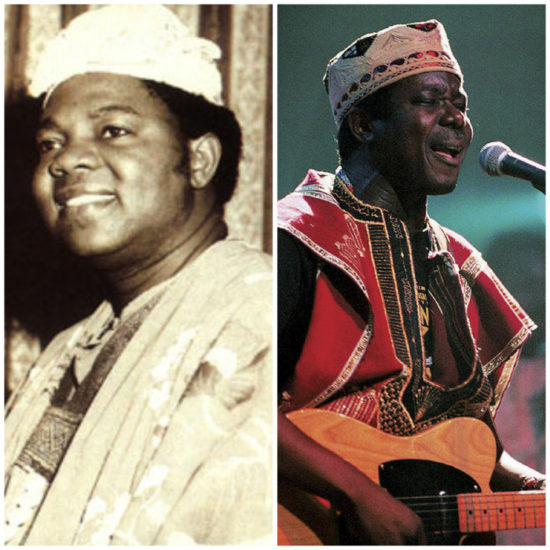 Popular Juju music superstar, King Sunny Ade has shared some secrets about rivalry in the entertainment industry using his case with Ebenezer Obey as an example.

King Sunny Ade disclosed that they always pretended to be at loggerheads and the aim of their supposed face-offs was for their fans to enjoy their music even though their friendship began with a clash between their fans.

The 73-year-old singer added that it was their fans that always believed they were fighting. KSA told Punch;

It was the fans that believed we were always fighting. Obey and I had been friends since we began our bands and we are still friends till date. He started his band a year before me. Also, we pretended to be fighting in order for our fans to enjoy our music. Then, we used to play at night clubs, and where he was playing wasn’t far from where I played. I recall that the fans would go and disrupt his band, and later come to disturb us too. One day, I went to his (Obey) house to meet him behind closed doors.

I asked him how we could manage the situation, and he also asked for my suggestion. We both agreed to change the date of our performances at the club. He chose Thursdays while I maintained Wednesdays. Later, we also pretended to our seniors that we had a misunderstanding, so I invited Pa IK Dairo, Haruna Ishola, Adeolu Akinsanya and two others, to help settle the rift. For a long time, to avoid clashes of our fans, if I had a show, I would ask if Ebenezer Obey was going to be there. If they said yes, I wouldn’t go; and that was the same thing he did too. Our elders then told us there should be no more fight between us, and we should make records to appease our fans.

So, when I sang, he replied too. As the two of us were holding the meeting in his house, we just heard a bang on the door and somebody (Olabisi Ajala) was shouting that so the two of us were friends, yet we were pretending otherwise. We didn’t open the door but we had already agreed on how we would be doing things from then on. I have to thank God for his (Obey) life because he later got a call from God and became a cleric. The bottom line is that we have always been friends. We later advised young musicians that they don’t need to fight or destroy one another’s shows because of unnecessary rivalry.

The post Ebenezer Obey and I often pretended to be fighting – King Sunny Ade appeared first on .