Mercy Aigbe's ex-husband, Lanre Gentry, says he has not yet remarried. Gentry  was in the news recently after he shared a photo of a lady on social media and many thought she was his new wife. In an interview with Punch, Gentry dismissed the report. He said the […]

Lizzo has announced that she's ready for Summer 2020, and she did it in style. The 32-year-old singer, whose real name is Melissa Viviane Jefferson took to Instagram to share these new sexy photos of herself posing in the pool while clad in a colorful bikini with a matching […] 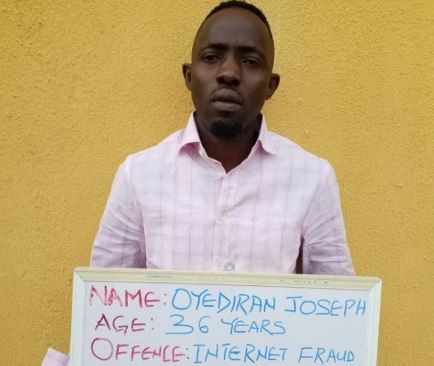 Ibrahim Magu, the Acting Chairman of the Economic Financial Crimes Commission (EFCC) has said that one the most wanted suspect by the Federal Bureau of investigation, Oyediran Joseph, has been arrested in Ilorin, the Kwara State Capital for his roles in internet fraud. Magu disclosed this in Ilorin on Friday 30th of August 2019 at a press conference to explain the EFCC/FBI Collaboration in the fight against internet fraud and cyber crime. The EFCC Chairman who was represented by Ilorin Zonal Head of the Commission, Mr Isyaku Sharu said the anti-graft body has been supportive to the activities of FBI and every other foreign counterpart whose responsibility is similar or analogous to the Commission."Three weeks ago, the US authority had written to us for assistance in tracking and possible arrest and prosecution of two most wanted FBI suspects in Nigeria. Investigation conducted by the EFCC revealed that Joseph had benefited about N60 million from the loot via western union transfers," he said.Sharu said that within seven months of operation, the Ilorin Zonal office independently arrested over 50 suspected internet fraudsters, secured conviction of 25, and got forfeiture of their exotic cars. He said that the money acquired from the fraudsters was millions of naira and all gorfeired to federal the government in line with court judgement. The Zonal Head said that four properties were linked to some of these cybercrime suspects, located in choice areas in Ado Ekiti, Ekiti state."These properties include Supermarket, Plaza, and so on, and the conservative value of these properties cannot be less than N800 million to N1 billion." The post EFCC arrests Nigerian internet fraudster wanted by FBI appeared first on Linda Ikeji Blog.

Spain has announced plans to welcome foreign holidaymakers in July after a major drop in Coronavirus cases as Bars, hotels, restaurants, and inland hotels have been told to "prepare to resume business in a few days". At a press conference on Saturday May 23, Spanish PM Pedro Sanchez […]

Report: Next-gen graphics cards from Nvidia and AMD will arrive in September

The claim comes from DigiTimes, which says that the long-time rivals are “set to launch their next-generation GPUs in September.” The publication also mentions that graphics card vendors are set to drop the prices of current-gen products in the third quarter to further stimulate demand. […]