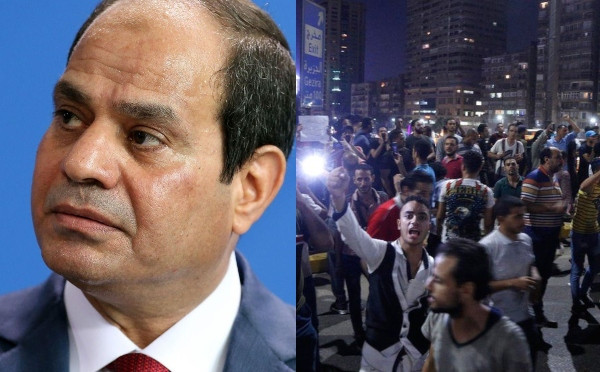 There's yet another uprising in Egypt as thousands marched through the streets of Cairo and Suez on Friday September 20, demanding the resignation of President Abdel Fattah el-Sisi.  The protesters chanting "rise up, fear not, Sisi must go" and "the people demand the regime's fall" were confronted by officers in civilian uniforms as they approached Cairo’s Tahrir Square, where mass protests which toppled Hosni Mubarak started in 2011.  #_ #___ pic.twitter.com/cmdALpJy1y— (@EslamMu7) September 20, 2019 The protest which took off after self-exiled Egyptian businessman and actor Mohamed Ali accused President el-Sisi of corruption and called on people to take to the streets and demand his removal, had reports of arrest and teargas being used.  In one of the videos Ali shared on Tuesday September 17, he said “If el-Sisi does not announce his resignation by Thursday, then the Egyptian people will come out to the squares on Friday in protest.”   :)#__ pic.twitter.com/ylDuRW5Pf2— – Mohamed Ali Secrets (@MohamedSecrets) September 20, 2019 Al Jazeera reported that in another video which the actor shared after the protest gained momentum, he encouraged the people to stand strong and continue demanding their rights. “God is great … enough already, I want to come back to Egypt. I miss Egypt and my people. May God strengthen your resolve,” he said. President Abdel Fattah el-Sisi has however denied claims of corruption. The protest which took off on Friday is a rare act as unauthorised demonstrations was outlawed in Egypt in 2013 after el-Sisi, led the military as defence minister to overthrow a democratically-elected President Mohamed Morsi. The post Egyptians demand President el-Sisi’s resignation in protest (video) appeared first on Linda Ikeji Blog.