The Managing Director of the Transmission Company of Nigeria (TCN) Usman Gur Mohammed has been sacked by the federal government.  Minister of Power, Mohammed Sale who approved the sack of the TCN Managing Director also appointed Sule Abdulaziz in his stead in acting capacity. The Minister's spokesperson Aaron Artimas, confirmed […] 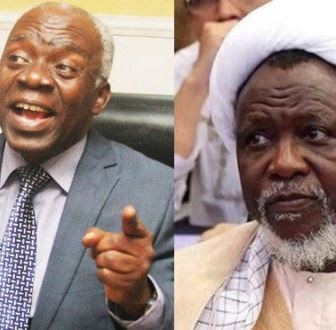 Human rights activist and lawyer, Femi Falana, has criticised the Kaduna State government over the stringent conditions it issued with regards to the permission granted by the court to Sheikh Ibrahim El-zakzaky and his wife, Zeenat, to embark on medical trip abroad.   The Kaduna State government had expressed concern that El-zakzakay and his wife could seek asylum in India. Upon this, the Governor Nasir El-Rufai-led administration prayed the court to make El-Zakzaky, his wife and each of the other defendants produce two prominent sureties, including a first-class chief or emir to qualify for the foreign medical trip.   The government, which expressed its displeasure at the terms of the medical leave, added, that “while the Kaduna State government respects the court’s ruling on medical leave, it disagrees with the premises on which it is based. Therefore, an appeal will be lodged on the matter, but a stay of execution will not be sought as the state government believes that a person may choose to travel abroad for any medical condition at his own cost.”   However, lawyer to the IMN leader, Femi Falana (SAN) said in a statement: “I thought that the Kaduna State government had planned to appeal against the order of the Honourable Darius Khobo granting leave to the El-Zakzakys to travel to India for urgent medical treatment under the supervision of the government.  “I hope that the plan to pursue an appeal in the case has been shelved as the Court of Appeal has ruled that you cannot stay the execution of orders of this nature. That remains the position of the law as espoused in the case of Mowarin v Nigerian Army, which was decided under a military dictatorship in the country.“The so-called agreement is totally alien to the penal code and the administration of criminal justice law of Kaduna State. Hence, the agreement is not brought under any substantive or adjectival law. My colleagues in the Ministry of Justice are not unaware of the position of the law that an agreement cannot vary or modify the order of a competent court. It is unfortunate that some highly placed public officers are so hell bent on abrogating the fundamental rights which have been fought for and won by Nigerians, even under the British colonial regime.  “For instance, the Prison Ordinance was amended in 1917 to allow the family members or friends of prison inmates to remove them from prison and take them out for medical treatment, if the prison facilities could not cater for any terminal illness. That provision has been incorporated in Regulation 12 made pursuant to the Prisons Act.  “In this instant case, the court did not release the El-Zakzakys to their family members but that they should be treated in a foreign hospital under the supervision of the government.  “Since the Department of Service Services (DSS), which has the custody of the El-Zakzakys, has announced on behalf of the Federal Government that the court order would be obeyed, the so-called terms of “agreements” of the Kaduna State government should be ignored because it is the height of provocative contempt.  “It takes two to tango. A party in a case cannot dream of some weird ideas, parade them as an agreement and impose same on a court and the other parties.”The post El-Zakzaky: The so-called terms of agreements of the Kaduna State government should be ignored, it’sthe height of provocative contempt – Femi Falana appeared first on Linda Ikeji Blog.

Hardware acceleration in Premiere Pro is nothing new. It has been using Nvidia CUDA for acceleration for a while now. Version 14.2 incorporates Nvidia’s Nvencode API to utilize the video card’s hardware-based NVENC encoder. Likewise, the patch will use the VCE hardware encoder on AMD […]

A Nigerian lady identified as Fatima Babashehu Liman, is demanding justice for her cousin, Sadiq, who sustained a gunshot injury in his hand after he was allegedly attacked by SARS officials in Abuja on Monday May 18. Fatima took to her Facebook to write, JUSTICE […]