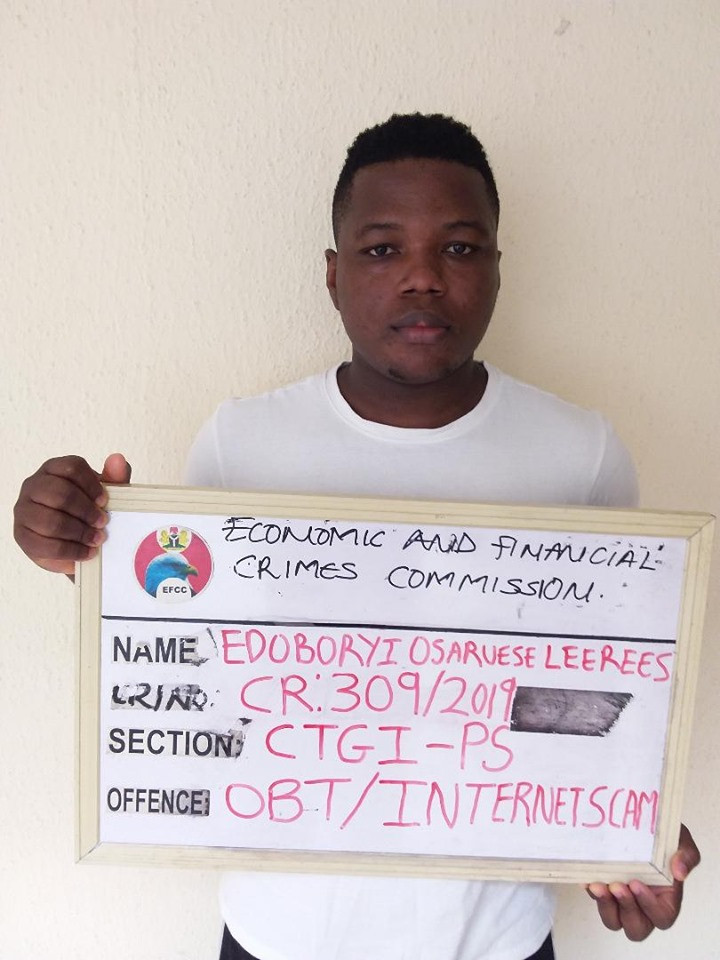 A fake Jumia agent identified as 23-year-old Edoboryi Osaruese Leerees has been arrested by the Economic and Financial Crimes Commission, EFCC in Benin, Edo state capital.  Edoboryi was arrested after a lady made a complaint of she and her friend paying over One Million Naira (N1,000,000) for the supply of goods they ordered from his page online but never got.  "Leerees was arrested following a petition by a lady who claimed to have paid him over One Million Naira (N1,000,000) for the supply of goods which she and her friends ordered from his page online but never got the items.According to the lady, Leerees sent her a message on WhatsApp and told her he was an agent of Jumia and pledged with her to help him market his products which were on sales at 40% discount.When the lady saw how attractive the prices were, she and her two friends credited his accounts with the sum of One Million Naira (N1,000,000) and waited for the delivery of their goods.However, when days elapsed and the goods were not forthcoming, she went to Jumia office to make enquiry and discovered that Leerees was not an agent but a fraud and then decided to petition the EFCC after he refused to refund her money" the statement read in part.  The suspect operates by using his social media platforms to advertise goods which are purportedly on promo at cheaper prices as a Jumia agent. The adverts appear genuine and makes unsuspecting social media users transfers money to him for goods they will never get.  Further investigation revealed that he is an internet fraudster that has defrauded several people with the name Vin Diesel and Mark Sinclair. He has reportedly made useful statement and would be charged to court soon.  The post Fake Jumia agent arrested in Benin appeared first on Linda Ikeji Blog.