Nollywood star actress, Omotola Jalade-Ekeinde has reacted to the newly amended NBC Broadcast Code, which reviews fines to be paid by erring broadcasting stations from N500,000 to N5 million for breaches relating to hate speeches, inciting comments and indecency. She said, “This is a good […]

Mr Eazi has revealed what will to his girlfriend Temi Otedola after they get married and social media can’t keep calm about it. Although it’s what we all know will happen, the way Mr Eazi dropped the hint on social media suggested that they are […]

With The Mandalorian proving so popular, hopes were high that Ewan McGregor reprising his role as Obi-Wan would be equally successful. But the Hollywood Reporter, citing multiple sources, claims that the series has been “put on hold” as Disney+ and Lucasfilm “attempt a retooling.” Source […] 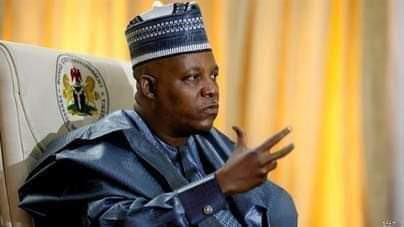 Borno State Governor, Kashim Shettima on Tuesday, described the attitude and actions taken by the Controller-General of Nigerian Prison Service, Ahmed Ja'afaru to deny the state's Investigative Panel access to Maiduguri Maximum Prison to carry out investigation on prostitution, lesbianism and forced sex in the prison yard as uncalled for and a sabotage to the state Government. Recall that in March 2019, Shettima inaugurated an investigative panel over a detailed report by Sahara Reporters, alleging incidences of child prostitution, Sodomy and forced abortion at the Maiduguri maximum security prison. Read previous report here He said, the denial for access into the Maiduguri Maximum Prison by those in high position at the Prison yard was responsible the empty report sent by the investigative committee. Shettima stressed that it is worrisome that a week period was given to the committee to submit its report, but had to be delayed for over a month due to failure of prison authorities cooperate. The Investigative Panel is chaired by the State's attorney general and commissioner of justice, Barrister Kaka Shehu Lawan while the permanent Secretary, Ministry of women Affairs and social development served as Secretary swung into action but to no avail. Submitting what could be described as an 'empty report' to the governor at the Council Chambers, Government House Maiduguri , Shettima described the attitude and behaviour of the Comptroller General of Nigerian Prisons for denying the Committtee access to the prison as uncalled  for and sabotage to address issues of international concern, despite the fact that the committee was inaugurated by the State Government. He pledged to contact the Minister of Interior next week to present him a vague copy of the report of the investigative panel set up by the state government to prevent future occurrence. The governor commended the panel for their efforts while noting that the allegations were too huge for any responsive and responsible government to folds it's arms and watch by not being compelled to take all the necessary action to investigate the allegations."We can not embarrass the federal government but we can not just watch such allegations pass without investigating the issues and expose those who are behind it."The allegations are of international dimension and governennt can not fold its arms to unravel the issue. I will go and meet the minister of interior Monday next week and tender our position to him ."The strength and quality of any society depends on the way and manner the society treats our mothers, sisters and female children. There is huge problem of child prostitution and trafficking in the country."The attitude of the Comptroller General of Nigerian Prisons is  distasteful  and condemnable. There is nothing to hide about these allegations. It seems there is something they are hiding ."However, we are going to handle the issue with maturity and dignity, and find out what is going on, and who are involved. That is why we set up the investigative panel to investigate the matter." But unfortunately, they were denied access to carry out their investigation at the prisons yard by the controller of Prison Maiduguri who claimed his hands were tight as he had to get approval from the headquarters Abuja," Shettima said. Earlier, the Chairman of the Investigative Panel, Barrister Kaka Shehu who  is also the State Attorney General and State Commissioner of Justice said since the period the panel was constituted and inaugurated, the committee were frustrated from undertaking its mandates.He said "all efforts were made to get access into the Maiduguri Maximum Prison to carry out our mandate and terms of reference but to no avail as the Controller of Maximum Prison Maiduguri denied us access and  said his hands are tight. That he has to get approval from his superior in Abuja."We even decided to write formal letters to the Comptroller General of Nigerian Prisons and Human Rights Commission seeking to get access to the Maximum Prison to  carry out our panel assignment, but up till now, we have nor received any reply to that effect."The withdrawal of Deputy Commissioner of Police as a member of the investigative panel by the then CP, Damian Chukwu, was also another problem. We submitted the letter of appointment of the panel by the governor and terms of reference of the panel to the prison controller but still he refused us  access to carry out our assignment," Shehu said.The post Gov. Shettima accuses Prison Boss of denying Investigative Panel access to Maiduguri Maximum Prison to investigate cases of child prostitution, others appeared first on Linda Ikeji Blog.

Power couple, Beyonce and Jay-Z were stylishly suit-up for the Roc Nation Pre-Grammy Brunch in Los Angeles on Saturday. Before they kicked off the star-studded event, the proud parents of three posed for a slew of playful and sultry photos. For the pre-Grammy Brunch, Beyonce showed off her toned […]

Nollywood star actress, Omotola Jalade-Ekeinde has reacted to the newly amended NBC Broadcast Code, which reviews fines to be paid by erring broadcasting stations from N500,000 to N5 million for breaches relating to hate speeches, inciting comments and indecency. She said, “This is a good […]