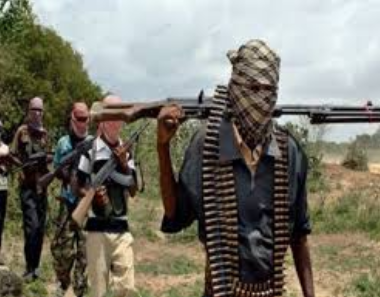 Armed men suspected to be kidnappers have struck again in Kuje suburbs of Abuja, killing one person and abducting a Nigerian Security and Civil Defence Corps (NSCDC) officer, along with his two children.   The attack happened at Dafara community whose District Head, Makeri Joseph, told newsmen in Kuje on Thursday, October 10th that the incident happened around midnight  with the gunmen shooting sporadically into the air. It was the second kidnapping incident in the area this week. Joseph said the gunmen, who were in army camouflage, came in large numbers and wielded sophisticated weapons. He said that they killed a community vigilante and whisked away a NSCDC officer with his two children.     He called on the Kuje Area Council administration and FCT Minister to urgently address the rising insecurity in the area. The Federal Capital Territory (FCT) Police Command, said it had commenced a joint counter operation against kidnapping in Kuje and its environs. DSP Anjuguri Manzahp, Police Public Relations Officer (PRO), FCT Police Command, on Thursday said joint operation comprising other security agencies had been extended to other identified black spots within FCT. He said the operation was aimed at rescuing hostages, arresting the suspects and permanently checkmating the emerging security concerns, especially around Kuje and Robuchi axis. Manzahp said the security agencies were working assiduously to rescue the victims. He called on the residents to be calm and support the ongoing operation with useful information to the police.“The police are reassuring the public that it will not relent on its effort until the activities of these hoodlums and other criminals are permanently checked. Further steps are also being made to engage relevant stakeholders in various communities as part of renewed effort to check crimes,” he said.  The post Gunmenkill one, kidnap NSCDC officer and his two kids in Abuja appeared first on Linda Ikeji Blog.