BBNaija star, Nina, has asked people to stop trying to ruin the lives of others by making false claims of rape or sexual assault/sexual abuse. In a post shared on her Instastories, the soon to be mum, said men and women who make false claims of […]

South African model/news anchor, Eva Modika shows off the house she built for her parents (photos)

Eva Modika, a South African model and News Anchor, has taken to social media to show off the house she just built for her parents. Eva shared the photos online with the caption;''Built my parents a house… yes I did that'' See more photos of the house […]

Transocean hired to drill on Shenandoah project in Gulf of Mexico

Transocean has been awarded a contract for drilling and completion services on the LLOG-operated Shenandoah project in deepwater of the Gulf of Mexico. LLOG operates the Shenandoah discovery since April 2018. The project is located in the unit comprised of Walker Ridge blocks 51, 52, […] 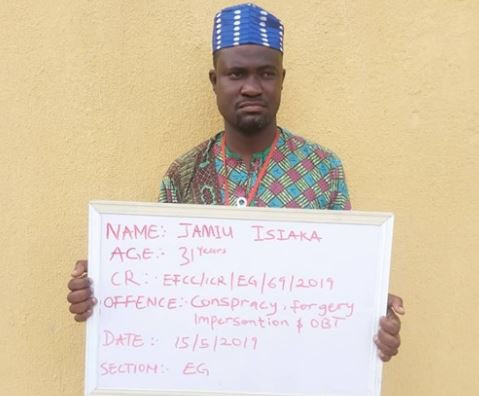 The Ilorin zonal office of EFCC has arrested a 31-year-old Islamic scholar/herbalist, Jamiu Isiaka for impersonating the Group Managing Director of the Nigerian National Petroleum Corporation, (NNPC) Dr Maikanti Baru and the Special Adviser to the President on Media and Publicity, Femi Adesina among other prominent citizens. The suspect with others who are still at large allegedly used the names of the senior government officials to scam a South Korean national, Keun Sig Kim, under pretence of getting him an NNPC license that would enable him purchase a company. The petitioner had paid over N30million (Thirty Million Naira) into the suspect's account as fee to get the license.According to him "I transferred $4,285.071 (Four Thousand, Two Hundred and Eighty-five United States Dollars, Seventy-one cents) to the United Bank of Africa, account number 2107575870 in the name of one Jamiu Isiaka, an associate of Mr Shola Adeshina. It is noteworthy that this account particulars have been provided severally for me to make transfer to."Isiaka, during interrogation with EFCC officials, claimed that he used the money to perform sacrifice on behalf of the petitioner. He claimed to have bought a vulture, elephant’s skin, elephant’s intestine, skull of a lion, liver of gorilla, among others. The suspect will soon be arraigned in court while efforts are ongoing to nab the accomplices at larger.The post Herbalist arrested for Impersonating NNPC’s group managing director, Femi Adesina andduping a foreigner of N30million appeared first on Linda Ikeji Blog.

A mother identified as Mammi Efficy on Facebook has taken to the platform to celebrate her daughter on her birthday. Sharing photos of her daughter adorned in a beautiful attire and makeup on her face, she wrote; “May your birthday and every day be filled […]

BBNaija star, Nina, has asked people to stop trying to ruin the lives of others by making false claims of rape or sexual assault/sexual abuse. In a post shared on her Instastories, the soon to be mum, said men and women who make false claims of […]