When my son was four years old, he was still having bathroom accidents, both day and night. It concerned us. We’d see a wet spot on his pants in the middle of a baseball game and we knew—it happened again. All the way up through […]

The Chairman of Asari Toru Local Government Area in Rivers State, Odiari Princewill, has died from COVID-19. According to reports, Odiari who is a strong loyalist to the state governor, Nyesom Wike, lost his battle to the viral disease on Wednesday night, May 27. Officials of the Nigeria […] 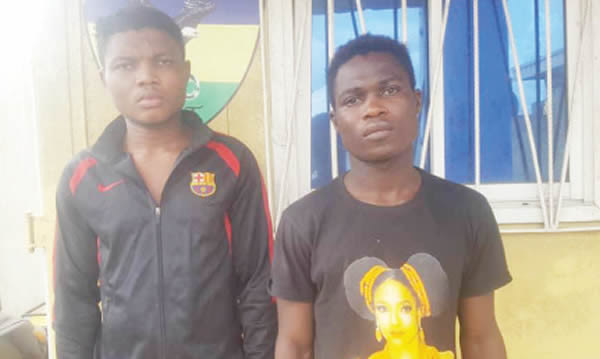 The Abia State Police Command has arrested a 23-year-old man identified as Promise Uzoma for robbing a businessman of N4.4m jewelry in a robbery attack with his cousin Chukwuebuka Ogubuike, in which a housemaid was also raped.  Confessing to the crime when paraded before newsmen, Uzoma said he took to robbery after his N70,000 was stolen while sleeping in a bus.  Uzoma said: “I bought the phone for N70,000. The native doctor asked me to pay N30,000 for the charm. I gave him the money, but seven days after I made the payment, the person didn’t return my phone."I went back to the native doctor and informed him that his charm didn’t work. He asked me to pay an additional N7000 so he could consult his oracle to know why his charms didn’t work. I refused and insisted that he should refund my money."He told me that he has given my money to his gods. I told him that he should refund my money. He then inserted my money into a box, sprayed some powdery substance on it and then handed it to me. I took the money from him and went to a sports betting shop, where I gambled away all the money." He further disclosed that after he gambled everything away, he became depressed. It was at that point that a friend he identified as Udo came to tell him about a robbery operation. Udo told him that he could raise money to buy a new phone and also boost his business.  “When we got to a particular compound, we met the doors open. We entered and met the man, his wife and their maid. We pointed our gun at him and asked for money, his phones and gold jewellery. He gave us N250,000 in cash and brought out all his gold jewellery."He cooperated because we threatened to kill him. I don’t know what came over me, but I raped his housemaid. I also wanted to rape his wife, but I left her because she was a nursing mother. After the operation, I got a Samsung phone and the sum of N100, 000.I didn’t bother about the gold. It was after I had been arrested that I learned the jewellery was worth N4.4million" Uzoma said.  The suspects were arrested by operatives of the Inspector General of Police Special Intelligence Response Team (IRT) led by a Deputy Commissioner of Police (DCP), Abba Kyari after the robbery victim identified as Augustine petitioned the police. The Police said that the suspects were members of a notorious robbery gang which specialised in robbing unsuspecting residents of Aba in Abia State.  "The same gang robbed Augustine’s home sometimes in 2018. In this latest attack, one of the suspects, Promise, raped Augustine’s maid."The robbers stole gold jewellery valued at N4.4million, cash sum of N250, 000, Nokia and Samsung phones valued at N200, 000, an expensive perfume and sneakers valued at N100, 000 in Augustine’s house. Following Augustine’s petition, the IG instructed Kyari and his men to head to Aba."Two members of the gang were arrested after weeks of investigation" the Abia state Police said in its statement. The post I became a robber after my N70,000 phone was stolen in a bus – Suspect who robbed businessman of N4.4m jewelry and raped his housemaid appeared first on Linda Ikeji Blog.

‘I know you don’t like me bro, i know you are on Jude’s side’ – May D responds after Ubi Franklin announced that the singer has cancelled their interview

Nigerian Singer, May D has given the reason he decided to cancel a schedule interview by Ubi Franklin on his Instalive talk show, ‘Talks With Ubi Franklin.’ Ubi had earlier taken to his Twitter page to disclose that his scheduled interview with May D, which […]

When my son was four years old, he was still having bathroom accidents, both day and night. It concerned us. We’d see a wet spot on his pants in the middle of a baseball game and we knew—it happened again. All the way up through […]