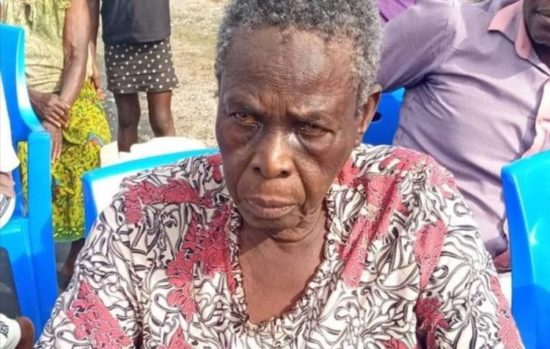 With her eyes swollen in tears, Beauty Uguoere Siasia, the mother of a former Super Eagles skipper and coach, Samson Siasia broke down and cried.

“I dont know why they keep kidnapping me. Only God knows,” the 80-year-old woman sobbed as tears dripped down her wrinkled face.

Mama, as she is fondly called, lamented that she had been kidnapped twice saying that her abductors on the two occasions told her that her son, Siasia is a millionaire.

She said after whisking her away to an unknown place, her assailants fed her with garri and bought drugs for her.

Saying that they took care of her, the traumatised woman said there was no time they beat her, adding that sometimes the abductors prepared soup for everybody in their camp.

Narrating the latest incident, she said: I was at my house when they came to kidnap me. They took me to the place. They took care of me.

“I was sick and they bought the drugs. They cooked and gave to me.

“They didn’t beat me. There were days that there was no food. Those days they drank garri and gave me garri to drink too.

“Sometimes, they cooked soup, prepare garri and we ate.

“But on Sunday, they told me we had stayed for too long and they were tired of our problem.

“They carried us on a flying boat and dropped us in a village. I dont know the name of the village.

“The carried us to their chairman place. I don’t even know the man. They called Seifa and Seifa came.

“As I am talking to you, I am not well. Before they took me I was not well. I want to go to the hospital.

“They built small house and use tarpaulin to cover the top. That was where they kept us”.

When she was told that she won’t be kidnapped again, Siasia’s mother quickly said Amen.

But she added: “They keep worrying me because they said my son, Siasia is rich and a millionaire”.

Also one of the victims, who was abducted when he took some undisclosed amount of money to the kidnappers, said on getting to where they directed him, the gunmen surrounded his boat, blindfolded him and took him away.

Relieving his ordeal, he said: “Where they kept us was very bad. I didn’t see anything there and I didn’t recognise anybody because before I got to the place, they blindfolded me.

“But the place was rough. We slept on benches. There was no foam. At times, they fed us with garri and beans.

“We used oil to eat garri. Sometimes, they cooked yellow soup and any how they cooked it you will eat because you want to live.

“I was in a critical condition. They were fond of beating me maybe because I am a man.

‘They would beat me morning, afternoon and night. They would tie me before I sleep.

“Even if mosquitoes were biting me, I couldn’t chase them away. They kept four people to guide me. I suffered a lot”.

The post ‘I Don’t Know Why They Keep Kidnapping Me’ – Siasia’s Mother Cries appeared first on .