A video circulating online captures media personality, Toke Makinwa making comments about her ex-husband, Maje Ayida. In the video, the media personality was sitting on an armchair, having a conversation with her family when she suddenly mentioned his name and said their relationship should have […] 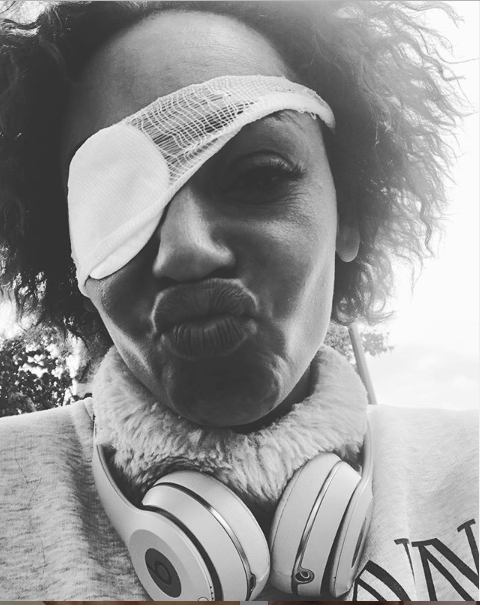 English singer and former Spice Girls star, Mel B is setting the record straight on rumors she went blind. Last week Friday, the 43-year-old singer was rushed to hospital after it was claimed she lost vision in her right eye just weeks before the Spice Girls reunion tour is due to kick off. According to The Sun, she arrived at Moorfields Eye Hospital in London and told medics that she was "totally blind" and "couldn't see anything" with her left eye. It was also alleged that it was caused by a botched laser surgery done 20 years ago to correct her vision but which ended up going wrong.  Taking to her Instagram to address the rumours alongside sharing a photo of her wearing a patch over her eye, the mother of three thanked her fans for their well-wishes and revealed she was diagnosed by an eye specialist with severe 'IRITIS' in my right eye and 'UVEITIS' in her left eye alongside a photo of her wearing a patch over her eye. Read what she wrote below.Thank you so much for all the lovely support and messages I’ve had about my eye. Just so you know the real truth. I had an awful experience last week when I went blind in my right eye and my left eye went blurry.Even though the stupid press said I’m ok and this has happened to me many times before, just to be clear I was NOT ok and this has NEVER EVER happened to me before,so who every is selling this story “a close reliable source” is full of BS and needs to get there silly facts right big time,I was actually in a lot of pain and very very scared but thanks to the incredible eye specialists in A&E at London’s Moorfields Hospital and after at Luton and Dunstable University Hospital I was diagnosed by and eye specialist with severe IRITIS in my right eye and UVEITIS in my left eye.I’m taking multiple prescription heavy duty eye drops and other medication the dr gave me that I have to take every day to keep the inflammation under control,Also I’m being so well looked after by Team Spice special thanks to our paramedics too!!im still dealing with it and will be fir the next 3/4 months to fully get it under control but I’m no longer worried that my condition will get worse.My only problem now is I have to find a very cool Scary eye patch. Does anyone – apart from Madonna – know where I can get one ?? The post ‘I was diagnosed with severe IRITIS in my right eye and UVEITIS in my left eye’ – Mel B addresses rumors she went blind appeared first on Linda Ikeji Blog.

McDermott files for Chapter 11 bankruptcy to eliminate $4.6 billion of debt

McDermott’s restructuring transaction will be implemented through a prepackaged Chapter 11 process that will be financed by a debtor-in-possession financing facility of $2.81 billion. Source link Related posts: Tower Resources sets Cameroon well spud date as it works to secure funding Eni to become operator […]