Former Aviation Minister, Femi Fani-Kayode and his wife, Ex-beauty queen, Precious are celebrating their triplet boy’s birthday today May 25. The proud mum of four who turns 31 today while her boys turn 2, shared stunning new photos on social media to mark their birthday. […]

Munirat Anto Lecky simply known as Anto has released some absolutely stunning photos to celebrate the end of Ramadan, Eid-al Fitr. The reality star took to her Instagram to share some fashion-forward looks in the spirit of the holiday. She wrote: Peace be upon you […] 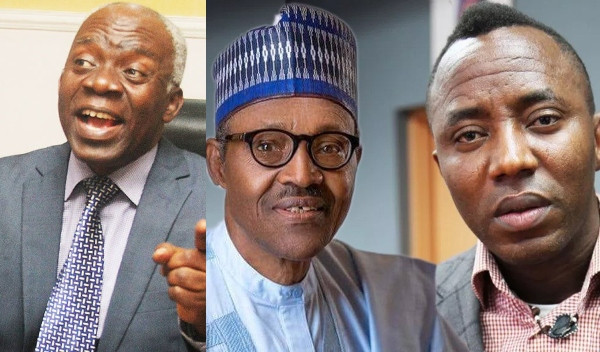 Femi Falana on Tuesday August 6, warned that Buhari will be his first witness in court if the Department of State Services (DSS) arraigns the convener of #RevolutionNow movement Omoyele Sowore, in court.  The human rights activist and Senior Advocate of Nigeria (SAN) made the disclosure at an event organised by the Chartered Institute of Bankers of Nigeria (CIBN). Revealing that he has been in contact with Sowore following his arrest on Saturday August 3, Falana recounted how the Nigerian President "called for revolution in 2011" though he didn't mention his name directly.  He further disclosed that the former Presidential candidate of the African Action Congress (AAC) refused to write statement, insisting he must speak to his lawyer.  “I do hope that the government will not be stupid to charge Sowore. In fairness to them (DSS), they gave him a telephone to phone me. Of course I knew they were monitoring the phone, and I told him I hope they won’t charge you, because if they do, some of the people in government will be our witnesses,” he said. “You know why? One of them, I won’t mention his name. In 2011, he asked Nigerians to learn from the Egyptian revolution and be ready for a revolution in Nigeria. So, he will be my first witness. “The late Chief Gani Fawehinmi and four other people were charged with treasonable felony by the Ibrahim Babangida junta. I was one of them. We were detained in Kuje prison for two months. We were taken to the court, and what was the offence? I think we went beyond Sowore. We posted thousands of posters across the country, that Babangida must go. That was the treasonable felony" he said.  Though it is still not clear if the DSS will be charging Omoyele Sowore to court, however it be noted that President Buhari called for 'revolution' through an electoral process in 2011. The post If Sowore is charged, Buhari will be my first witness in court because he called for ‘revolution’ in 2011 – Femi Falana appeared first on Linda Ikeji Blog.

The Lagos State Police has denied viral report that Nigerian Grammie nominee, Burna Boy was arrested by men of the force on Sunday, 25th of May. Burna Boy was reportedly said to have been arrested after his neighbors lamented over the noise coming from his […]