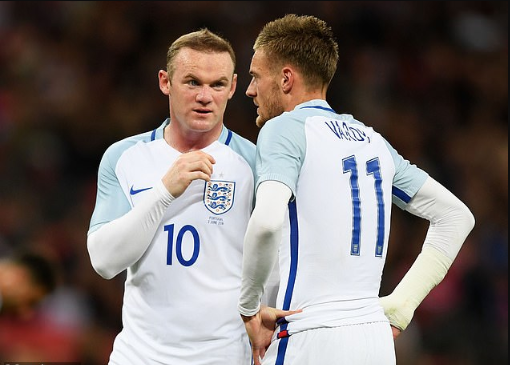 Jamie Vardy has reportedly unfollowed his former England teammate Wayne Rooney on social media amid the ongoing feud between their wives, Rebekah and Coleen. Last week, Coleen, 33, took to Instagram to call out her former friend Rebekah who she accused her of Selling false Stories' about her to The Sun.  In response to the accusation, Rebekah Vardy, 37, who is currently pregnant with her fifth child denied all the accusations and even slammed Coleen for going public when she knows she is heavily pregnant

Now, The Sun are reporting that the Leicester City striker, 32, is so angry about the whole situation and has unfollowed Rooney, 33, from his Instagram and Twitter accounts but Rooney still follows Vardy on Instagram.

A source told the publication: 'Jamie has always got on well with Wayne, but he won’t stand for having his wife hung out to dry in public like this.' The insider added that footballer Jamie is standing by his wife of three years '100 per cent' as she launches a fight to prove her innocence against claims that she sold false stories about Coleen. Said a friend: 'He’s totally behind Becky and furious with the Rooneys for the way they have gone about this.  'He and Wayne always got on well and he likes him. But he has made his feelings clear. Cutting him off on social media is a totally deliberate snub.'The post Jamie Vardy ‘unfollows’ Wayne Rooney on social media’ after his wife Coleen called out Vardy’s wife on Instagram appeared first on Linda Ikeji Blog.