Muslims in Nigeria are to continue fasting till tomorrow May 23 as the new moon which signifies the end of Ramadan was not sighted this evening May 22. Many Muslims had thought today will be the end of the fast and tomorrow will be Eid Fitri […] 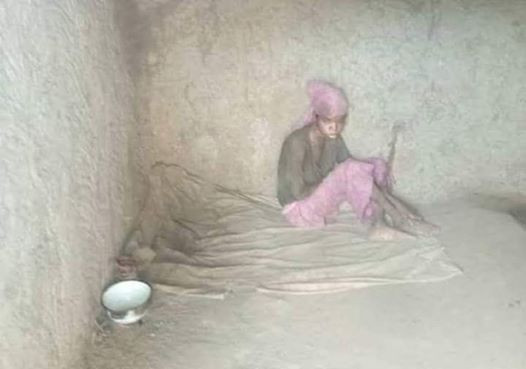 Operatives of the National Agency for the Prohibition of Trafficking in Persons, NAPTIP, have arrested a 62-year-old man in Kano State for chaining and locking up 16-year-old daughter, Fatima, for rejecting forced marriage. According to reports, the suspect Muhammad Ujujud, a resident of Rinji village in Madobi Local Government Area of the state locked up the teenager as punishment for refusing to accept a husband he forced on her. It was gathered that the man also locked his son Shehu, in separate cells in his house. Unfortunately, the boy died in detention recently. A member of the community who secretly leaked the story to journalists explained that the man was notorious for meting out corporal punishment on his family and he was dreaded in the village. According to the locals, Mr Ujudud only rarely fed his captive children with food. “He hardly gave them food to eat. The sleep and defecate in just one point,” said a neighbor who preferred not to be named. Appearing pale and ill, NAPTIP officials then took Binta to a private hospital in Kano, where she is currently receiving treatments. In an interview with DAILY NIGERIAN reporter, one of the sons of Mr Ujudud who fled his father’s way of punishment, confirmed that his brother Shehu starved to death in captivity. He added that his mother died few years ago and his father is now living with their step mother. The state commandant of NAPTIP, Shehu Umar, who confirmed the arrest and detention, said investigation is currently ongoing. Watch the video below. The post Kano father chains, locks up his 16-year-old daughter for two years because she rejected forced marriage (video) appeared first on Linda Ikeji Blog.

Four more COVID19 deaths have been recorded in Lagos. Professor Akin Abayomi, Commissioner for Health in the state, disclosed this via Twitter. This brings the total number of deaths from COVID-19 in Lagos to 46. 139 new #COVID19 infections confirmed in Lagos. Total number of confirmed #COVID19 cases […]

Up until now, that’s seemingly been the case, but one Nvidia-created AI is challenging the norm. To celebrate Pac-Man’s 40th anniversary, the hardware maker fed a computer farm a whopping 50,000 “episodes” of gameplay from the title — but not to teach it to be […]