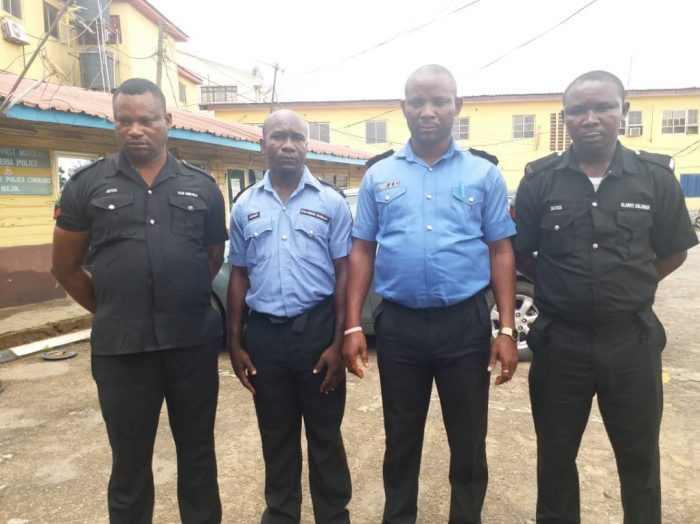 The Lagos state government has announced plans to bring to justice the four police officers caught on camera shooting dead two suspected criminals in the Iba area of the state. The police officers had gone to the area for a raid following a complaint from a resident of the area and in the process, arrested the suspects which they shot dead. The police officers identified as  Inspector Fabiyi Omomayara, Sergent Olaniyi Solomon, Sargent Solomon Sunday and Constable Aliyu Mukaila, were dismissed from the state police command for going against the ethics of the profession. The officers were released from prison after the state Directorate of Public Prosecution ordered their release. DPP says the officers have no case to answer as there is no sufficient facts to pursue a case of murder or involuntary manslaughter against the officers. The families of the suspects, Sgun Sholaja and Ogheneove Ebobo, petitioned the state government. The state government issued a statement today saying that sequel to a petition received from the families of the victims alleging extra judicial killing of the deceased persons by the four police officers, the Attorney General and Commissioner for Justice, Moyosore Onigbanjo SAN has directed the immediate investigation and review of the case. “In the course of investigation initiated by the Office of the Attorney General/ Commissioner for Justice, fresh evidence came to light indicting the concerned police officers.“This has necessitated a review of the earlier legal opinion issued, and the Attorney General/ Commissioner for Justice has directed that the suspects be charged for the killing of the deceased persons.“The Attorney General/ Commissioner for Justice assures the general public of the resolve of his office to uphold the Rule of Law in the State,” the statement said.The post Lago state government set to try police officers caught on camera shooting two suspects dead appeared first on Linda Ikeji Blog.