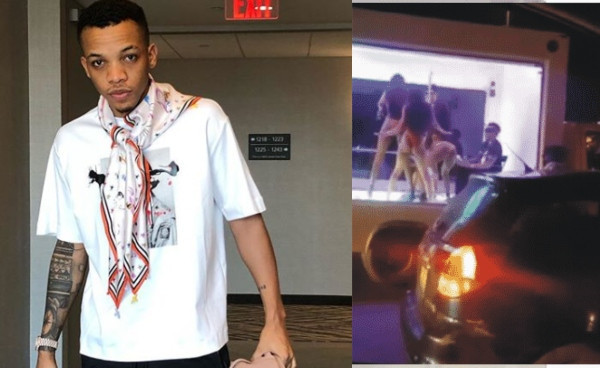 Tekno is currently at the Lagos state police command where he is being questioned by the state police CID for dancing with half-naked ladies in a tranparent truck in the Lekki area of the state. Recall that videos of the singer dancing in a truck with the naked girls sparked an outrage after it surfaced online.  In an exclusive chat with LIB today August 6th, the state police command spokesperson, Bala Elkana, said Tekno arrived their office for questioning this morning ''Tekno has been invited by the State CID in respect of those strp dancers in the truck in a public place dancing naked. So he is invited for questionning. He is in our office at the moment'' Bala told LIB When asked if he will be charged to court, Bala said he does not know for now as the command is still investigating the matter. The act of displaying nudity in public spaces contravenes Section 136 of the Criminal Law of Lagos State, 2015 which provides that any person who commits any act of gross indecency with another person in public commits an offence and liable to a conviction to three years imprisonment.  The post LIB Exclusive: Police invites Tekno for questioning for dancing with naked girls in Transparent truck appeared first on Linda Ikeji Blog.

Some upcoming Nollywood actresses have called out movie producer, Victor Okpala for allegedly demanding for sex in exchange for movie roles.  Sharon Osiyerimo Ohunene Jatto who shared screenshots of her chat with the movie producer, slammed him for putting out a “say no to rape” post even when he […]

The new Define 7 “Compact” is a smaller and more affordable version of one of our favorite PC cases. It’s compact sure, but still able to fit a big RTX 2080 Ti Strix inside, making it suitable for most gaming systems. Source link 0 0 […]