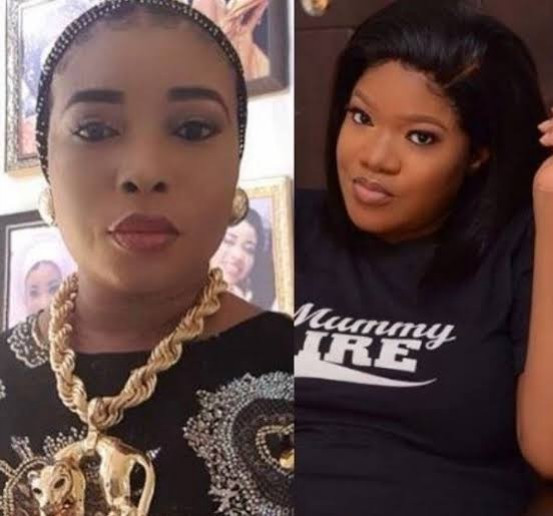 Liz Anjorin has countersued Toyin Abraham after she was sued for libel. Toyin Abraham sued Liz Anjorin first for libel after Liz accused her of being the one who provides Instagram blogs with damaging information about her fellow actresses (read here). Toyin reacted by saying she will not come down to Liz's level. Toyin replied with legal documents demanding that Liz "cease and desist in publishing defamatory statements" about her. In reply to being sued, Liz granted an interview where she stood her ground and continued to attack Toyin Abraham. She eventually went the legal route too and sued Toyin Abraham. Liz Anjorin's lawyer demanded an apology from Toyin for posting defamatory statements about her. Sharing the legal documents, Liz wrote: I am used to myopic cracked head and dead, low life with zero achievement sychrophants consoling themselves with lines such as "I have instructed my lawyer to respond, bla bla bla" when weighty allegations and evidence(s) stare them in the face. By principle, I am an APOSTLE of dignity and respect on social media and by nature I am never going to keep QUIET in the face of EVIL and wickedness. I also belief that whatever rights you have, you must be responsible with them. The fact, that you have rights to have fans doesn't mean you groom them to commit crime or indulge in anti-social behaviours online.The gibberish you gave as a reaction is tasteless, classless and uncouth. When you maliciously came up on social media in your usual way to lie against me and subjected my hardwork and personality to untold cyber-attacks with the aid of your followers with deadly, fabricated evidence(s) , , The evil you groomed will consume you soon. I think the WORLD will soon see that you have no single dignity left in you, hence you could still muster words when a FAN or an account you glorify openly is seen sending secret message to a criminal blogger just to subject your colleague to defamation, cyber-attacks and assaults. You are an example of failed women trying bring HARDWORKING women down secretly.You accused me of peddling DRUGS and left me with no option now than write a petition to NDLEA to investigate both of US for drug related offences. They must as a matter of fact TEST both of us for drugs and publish their outcome. You and I know you desperately need a high powered rehab before you can stop taking cocaine. And only God knows how many of your followers and fans you have initiated into these substance intake.While I am using my resources to empower and employ people, you are busy using your followers as human shields to hurt your colleagues and targets. You may fake your personality to them, but we know you. .You must tell the world why your glorify follower @m_adeoye slide into a deadly blogger to sponsor a deadly and destructive story against me …Until I get justice I will NEVER back down .. 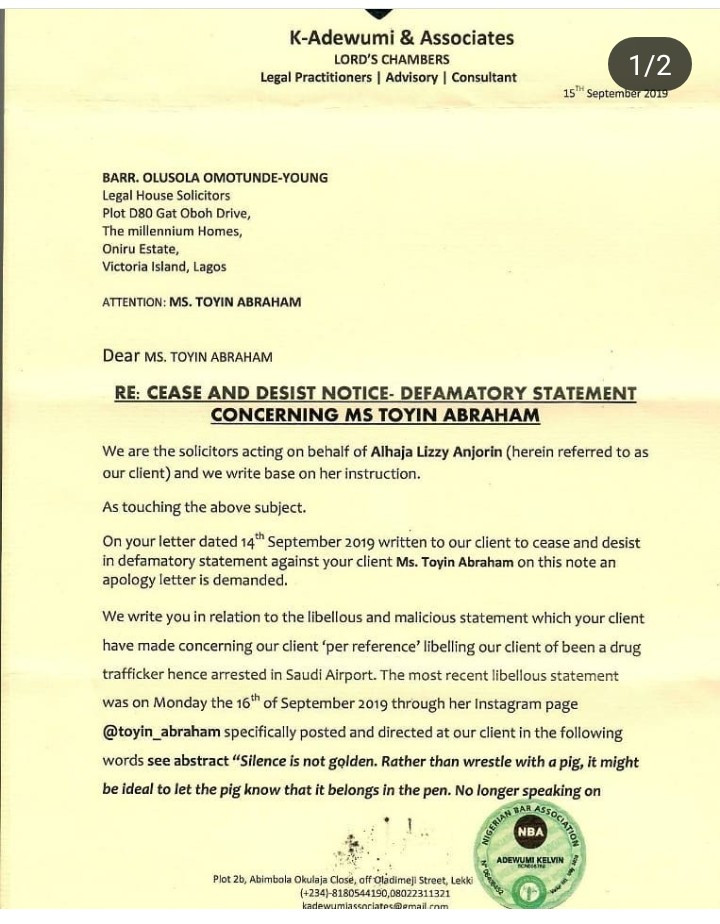 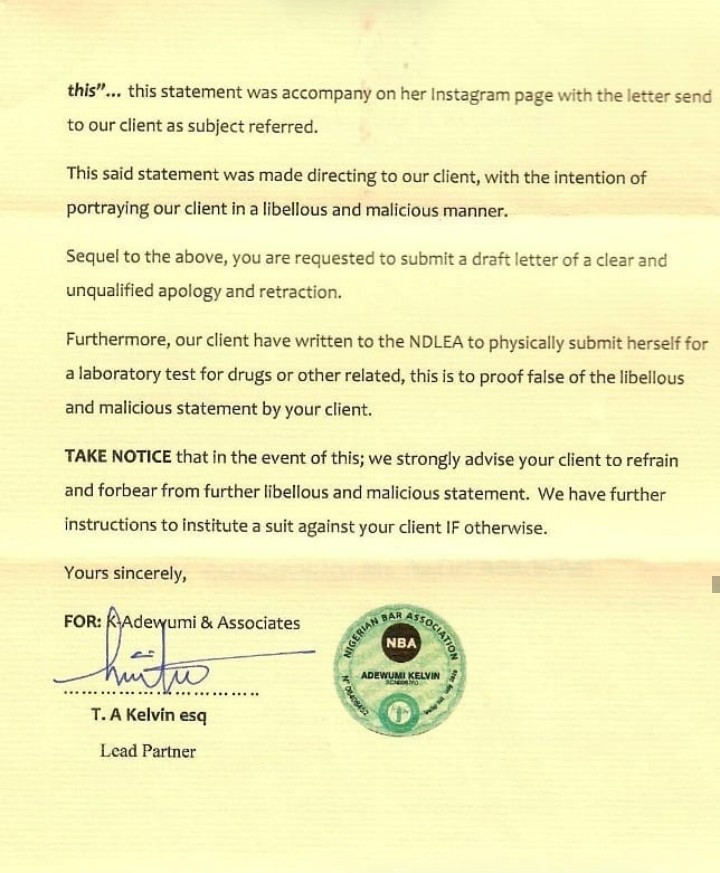 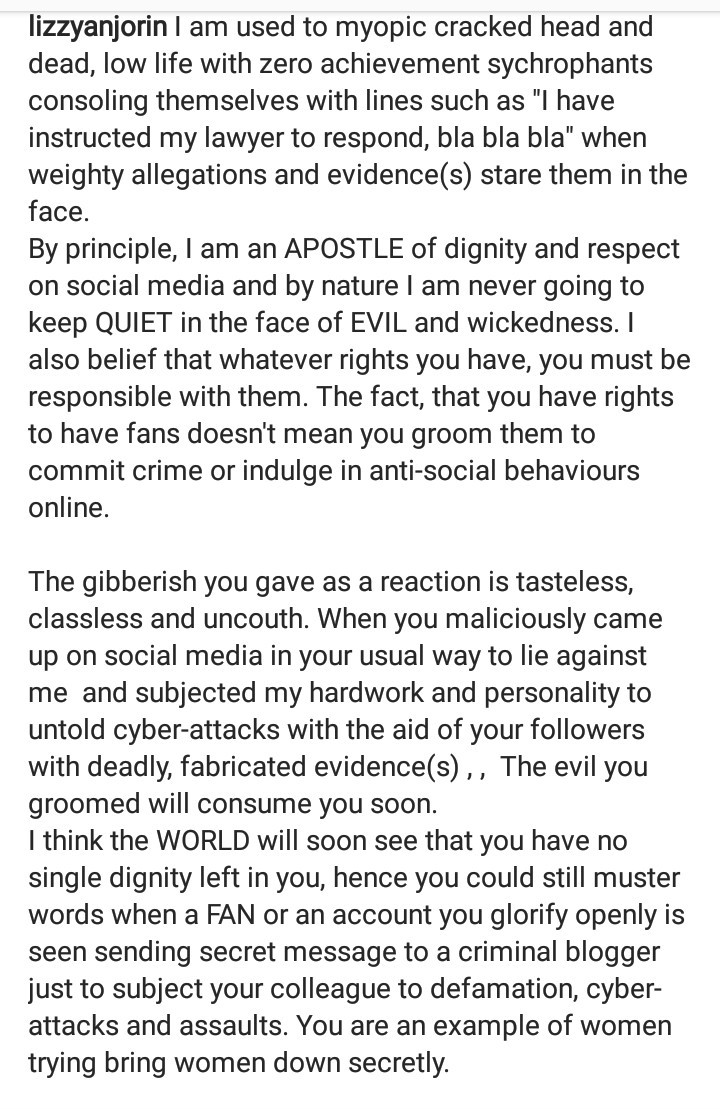 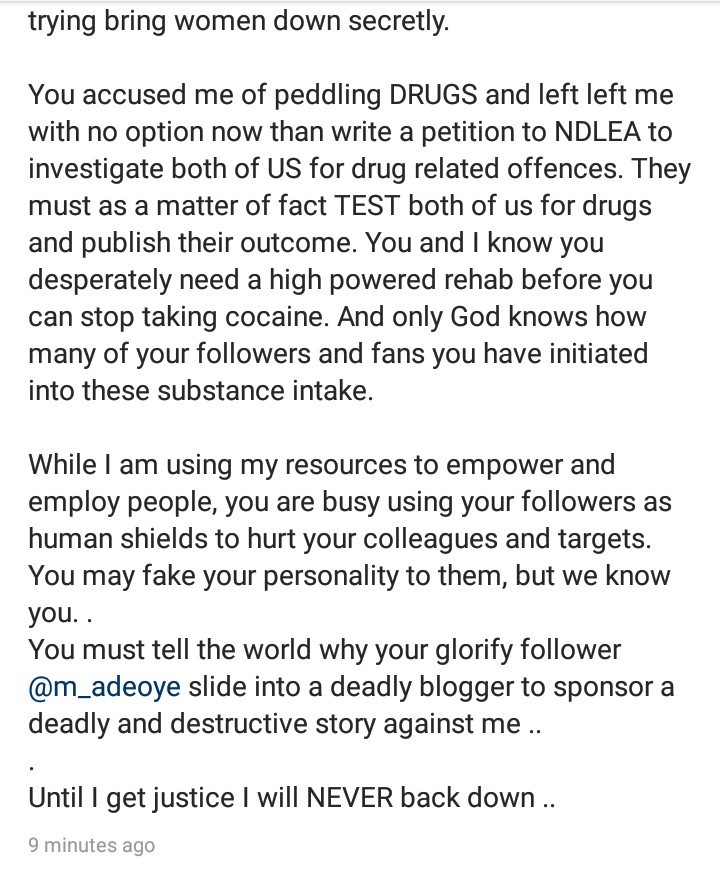 The post Liz Anjorin countersues Toyin Abraham and demands an apology after she was sued for libel appeared first on Linda Ikeji Blog.