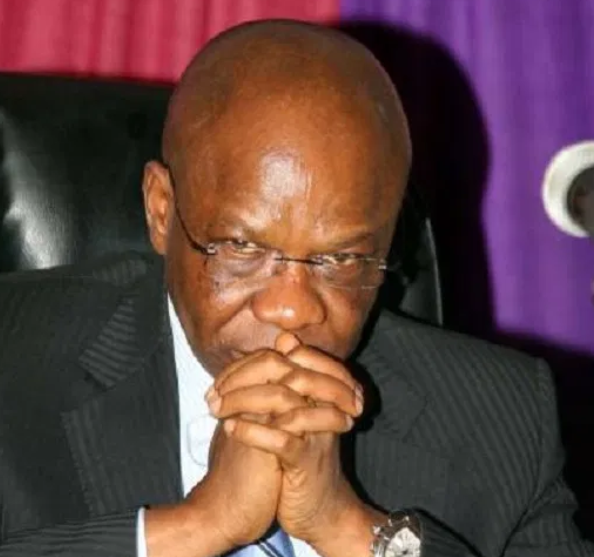 EFCC, on Thursday, October 23rd re-arraigned a former chairman of the Independent National Electoral Commission, INEC, Professor Maurice Iwu, over alleged fraud of laundering N1.23 billion on four counts before the Federal High Court in Lagos, Southwest Nigeria.   The re-arraignment became necessary, since the former INEC chairman was arraigned during judiciary vacation before a vacation judge, professor Chuka Obiozor, as the case file was later re-assigned to another judge, Nicholas Oweibo.   When the charges were read to him, he pleaded not guilty, thereafter his counsel, A. A. Usman, in oral application urged the court to allow him continue on his former bail he was granted when he was first arraigned before the court.   Usman further told the court that since Iwu was granted bail, he has kept to the terms of the bail. The EFCC prosecutor, Rotimi Oyedepo did not raise any objection. However, Usman drew the attention of the court to an application filed before the court by the defendant challenging the territorial jurisdiction of the court. The presiding Judge, Oweibo while acceding to the request of the defence counsel adjourned till 25th November, 2019 for trial to commence. In the charges, the anti-graft agency alleged that Iwu committed the offence in the build-up to the 2015 general elections in which President Muhammadu Buhari defeated the then incumbent President, Goodluck Ebele Jonathan.Iwu between, December 2014 and March 27, 2015, was alleged to have aided the concealment of N1.23 billion in the account of Bio-resources Institute of Nigeria Limited with number 1018603119, domiciled at the United Bank for Africa., the money he ought to have reasonably known formed part of proceeds of an unlawful act, to wit: fraud.”It was further stated that the offence committed by the ex-INEC chairman was contrary to sections 18(a) and 15 (2) (a) of the Money Laundering ((Prohibition) Act 2011 and was liable to be punished under Section 15(3) of the same Act.  When the charges were read to him then, he pleaded not guilty.   Thereafter, based on bail argument canvassed for by his lawyer, Hamed Raji and opposed by EFCC prosecutor, Oyedepo, the presiding vacation judge, Chuka Obiozor admitted him to bail in the sum of N1 billion with two sureties in like sum.  The first surety must be resident in Lagos State and must also show evidence of ownership of property in Lagos State and furnish the court with evidence of tax payment of three years, among others.The post Maurice Iwu re-arraigned over N1.23bn fraud appeared first on Linda Ikeji Blog.