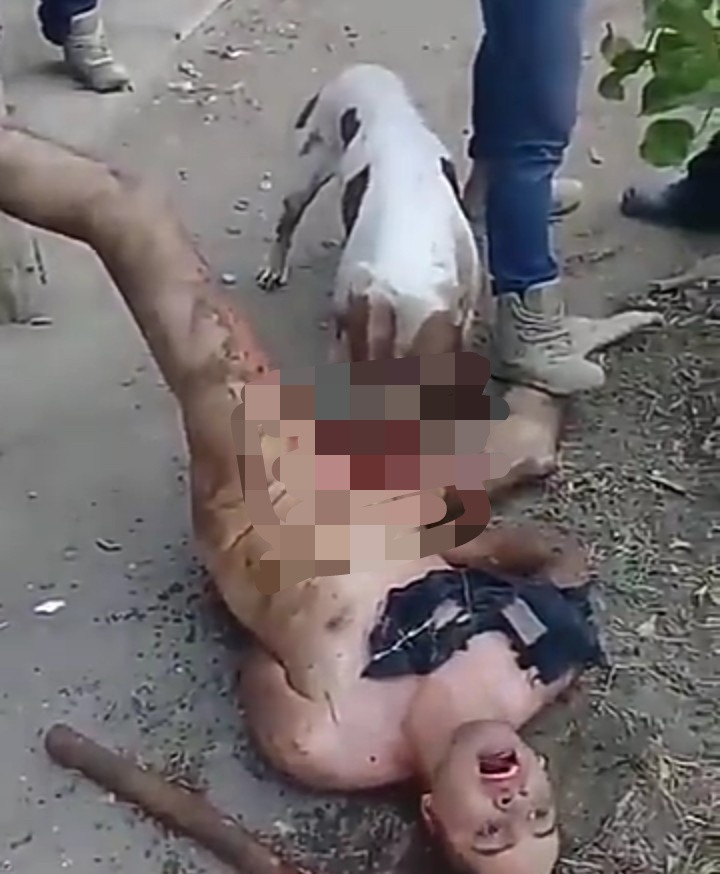 A horrific video making the rounds online shows an alleged rapist being punished by having a bit bull terrier tear off and eat his genitals. In the video recorded in a public place in Mexico, the alleged rapist, who is accused of assaulting a woman, is seen lying on the floor after he was stripped naked. His hands were tied behind him and a number of men can be seen surrounding him, with one pinning one of his legs down by stepping on it while another man held his other leg to spread his legs apart. As the alleged rapist is held down, a pit bull terrier is seen tearing at the man's male member and eating it until there was only red bloodied flesh in between his legs. And even then, the animal did not stop. When the alleged rapist, believed to be in his 30s, screamed out in pain, a third man put a piece of cloth in his mouth to muffle his screams while the man holding one of his legs pulled it farther apart to give the dog access to what was left of the helpless man's genitals. Another dog is seen in the video barking but it doesn't go close to the man's penis. A total of five men can be seen, standing around to supervise the barbaric torture while the man being punished cried out for mercy, saying in Spanish, "Stop. Leave me now. Leave me now." The video is too graphic and cannot be shared here.  The post Mexican gang castrate alleged rapist by stripping him naked and letting pitbull tear off and eat his genitals appeared first on Linda Ikeji Blog.

A Nigerian doctor, Bright Oris, has shared the heartwarming story of how police officers found a newborn baby girl dumped inside of a dustbin and rushed her to the hospital where he works. According to him, the police officers attached to the Niger state police […]