Popular Nigerian Dancer and video vixen, Kafayat Shafau-Ameh otherwise known as Kaffy, is currently in mourning as her mother recently passed away. Kaffy made the disclosure via her instagram page in the early hours of Monday, 25th May, 2020. Sharing a throwback video of herself […]

Nigeria’s dance queen, Kafayat Shafau Ameh popularly known as Kaffy, has just lost her mother at the age of 85. Kaffy made the announcement today, May 25th, on her Instagram page with a throwback video of her mum dancing. Skin Whitening Forever She wrote; “Mama […]

Two Coronavirus patients have been discharged in Osun state after recovering from the disease, testing negative twice for the virus.  The State Commissioner for Health, Dr. Rafiu Isamotu, who made this known in a statement on Sunday May 24, also confirmed two new cases of Coronavirus […] 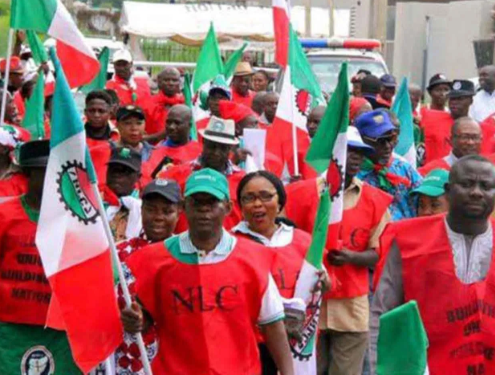 Labour unions have asked their branches across the country to get set for an industrial nationwide action ahead of the expiration of the ultimatum issued by labour unions over the minimum wage implementation, Labour leaders issued a communiqué, warning that economic activities would be shut down on October 16th 2019 if the federal government failed to reconvene a meeting of the committee on consequential adjustments of workers salaries based on the new minimum wage.   The unions, led by the Nigeria Labour Congress (NLC), also insisted that the government should hold a final meeting on October 15 to resolve the disagreements. The federal government and the unions have met on different occasions to deliberate and resolve the minimum wage controversy.   The latest meeting was held on Wednesday. After the first phase of negotiations collapsed due to percentage differences between the two parties, the federal government’s negotiating team and the Joint National Public Service Negotiating Council, which is representing labour unions in the negotiation, are scheduled to meet again on October 15. The meetings notwithstanding, labour unions are preparing for a strike action should their demands not be met. The General Secretary of Joint National Public Service Negotiating Council, Alade Lawal, last week said mobilisation of workers for a possible industrial action after October 16 had reached an advanced stage.   He said the partial implementation of the minimum wage for levels one to six was a ‘divide and rule’ system that would be vehemently opposed by labour. In furtherance to the union’s threat, the General Secretary of the NLC, Emma Ugbiaja, has now asked the union’s members to prepare for industrial action should no agreement be reached by Wednesday.”You will recall that a joint Communique…  said industrial harmony could not be guaranteed in the country should an agreement not be reached with the Federal Government on the Consequential Adjustment of Salaries as a result of the New National Minimum Wage of N30,000,””You are hereby directed to coordinate preparations with TUC and JPSNC in your State for necessary industrial action should the time expire without an agreement as contained in the communique” the letter by Mr Ugbiaja to the union’s members reads.The post Minimum Wage: NLC tells Nigerianworkers to get ready for nationwide strike appeared first on Linda Ikeji Blog.

Toni Braxton, 52, strips to her underwear to show off her incredible body

Toni Braxton, 52,  took to Instagram to show off her banging summer body. The mother-of-two displayed her incredible curves while clad in just her black underwear. The singer captioned the photo: "Beaches are open and I'm beach body ready… but I'm too scared to go. It's still […]

Billionaire daughter Temi Otedola is definitely having fun in her relationship with Nigerian singer Mr Eazi. She never misses an opportunity to show off her love for the singer on her social media pages. And this is to the envy of other people online. Recently, […]

Popular Nigerian Dancer and video vixen, Kafayat Shafau-Ameh otherwise known as Kaffy, is currently in mourning as her mother recently passed away. Kaffy made the disclosure via her instagram page in the early hours of Monday, 25th May, 2020. Sharing a throwback video of herself […]