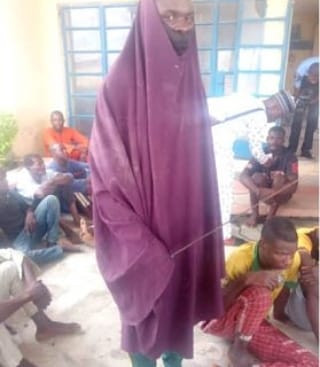 The police in Niger State have arrested one Mohammed Ali, a 24 year-old tailor of State Low Cost, Lapai town, Lapai Local Government Area of the state for allegedly stealing female pants. Also arrested for stealing female pants are two students of Izom Science Secondary School, Gurara Local Government Area of the state. Spokesman of the police command DSP Muhammad D-Inna Abubakar said the suspects were arrested following complaints by victims.“Acting on the complaints, our operatives of Kaffin-Koro Division arrested one Abubakar Sadiq aged 18 and Ephraim Isaiah, 19, both students of Izom Science Secondary, Gurara LGA in connection with stealing pants,” he explained. The suspect, Mohammed Ali told newsmen that he had stolen three pants at different locations in the area, adding that he was on the verge of stealing another after gaining access through a broken window when a lady raised an alarm. Ali also mentioned one Malam Madaji Yabajeko of Agaie Local Government Area, who is at large, as the receiver of the pants. The PPRO said the command became concerned because of the rising cases of the offence, adding that investigation showed that the culprits have clients waiting to buy the stolen pants. The command also arrested three suspected armed robbers who allegedly dressed in hijab to attack unsuspecting victims.The post Niger Police arrest 24 year-old man who disguise in hijab to steal used female pants appeared first on Linda Ikeji Blog.