A video which has gone viral online captured moment officials of Asset Management Corporation of Nigeria (AMCON) took over the Abuja home of Buba Galadima, a strong critic and former ally of President Muhammadu Buhari.  Asides losing his houses at No. 15 Addis Ababa Crescent, Wuse Zone 4 in […]

A lecturer in the Department of Quantity Surveying at the Obafemi Awolowo University, Ile Ife, simply identified as Dr. Mrs Akintola, has died from complications that arose after welcoming a set of twins. According to reports, Dr Akintola welcomed her set of twins and became ill. She died […] 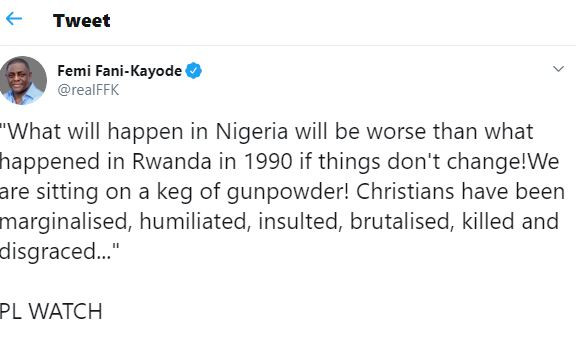 Femi Fani-Kayode, Nigeria’s former Aviation Minister has said the country is sitting on a keg of gunpowder and that if things did not change, what happened in Rwanda in the 90s will be a small thing compared to what will happen to Nigeria.   Fani-Kayode, in series of tweets also said no matter how much secular education one might have had and that even if one went to the best schools in the world from the age of seven as he did, if one did not have an in-depth knowledge and understanding of the Word of God and the Holy Bible, one is nothing but an intellectual barbarian.“It is common knowledge that the leader of the great 1917 Russian Bolshevik revolution and head of the world’s first communist state, Vladimer Lenin, approved the execution of Tsar Nicholas 11, the last of the Russian Tsars, and his wife, son and five daughters in 1918.  “What many do not know is that 31 years earlier, in 1887, Nicholas 11’s father, Tsar Alexander 111, had approved the execution of Lenin’s older brother, Alexander Ulyanov, who was 21 years old at the time, for attempting to assassinate him and effect a revolution. What will happen in Nigeria will be worse than what happened in Rwanda in 1990 if things don’t change! We are sitting on a keg of gunpowder! Christians have been marginalised, humiliated, insulted, brutalised, killed and disgraced…”  “We have become a nation of sociopaths…If I were to see Buhari I would ask him why he hates us so much and why, like Pharaoh, he has hardened his heart. I would tell him that I suspect that God has hardened his heart unto destruction,” Fani-Kayode tweeted.The post Nigeria is sitting on a keg of gunpowder Femi Fani-Kayode appeared first on Linda Ikeji Blog.

In May 2019, Blessing Okoro made headlines after she tried to claim businessman, Onye Eze’s house as her own. But she says it all ended up being a blessing to her. The Instagram relationship blogger was arrested on May 27, 2019, and placed in handcuffs […]