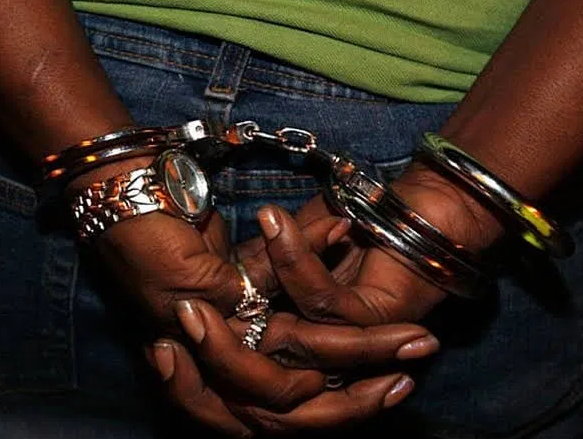 A Nigerian woman identified as Jumoke Monsurat Ayedun has been arrested in New Jersey, United States after she scammed an elderly woman of $17,000.   Using the old 419 trick, Ayedun had told the woman, who later became her victim, that the victim was eligible for a grant of $75,000 from the United Nations Democracy Fund Program. The Smith County Sheriff’s Office said the victim, based in Smith County, Texas sent Ayedun $17,000 in total, to access the $75,000 from a fake UN Fund.   The victim later talked to a family member, who told her it was a scam. The police waded in.  According to the sheriff’s office, the victim told officials a person using a fake Facebook contacted her saying they were a family member.   The victim began to talk to the scammer after seeing a picture of another family member of the victim. The Smith County Sheriff’s Office began to investigate the case and tracked down the suspect through the bank account number used by the suspect during the transactions.   Investigator John Partlow determined the suspect as 29-year-old Jumoke Monsurat Ayedun, a Nigerian living in New Jersey on a visa. Partlow obtained a passport picture of Ayedun and determined she was the same person as the suspect seen on an ATM video removing money from the account. Parlow also determined Ayedun had been receiving payments into her account from various sources such as Venmo, Zellepay and personal checks.   Partlow helped to freeze Ayedun’s account to possibly make money available to the victim.  A warrant for Ayedun’s arrest was issued in September. Her bond was set at $1 million. Ayedun was arrested Monday, October 7th by police in Teaneck, New Jersey. She is currently in the Bergen County Jail awaiting extradition.The post Nigerian lady, Jumoke Ayedun arrested for duping an elderly woman in U.S. appeared first on Linda Ikeji Blog.