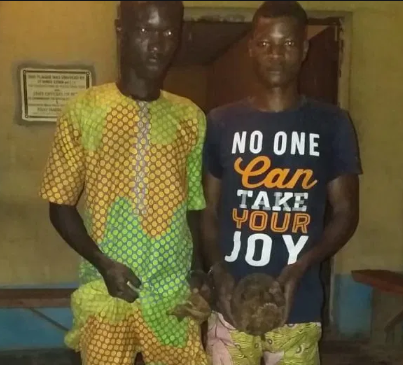 The Ogun State police command have arrested two persons identified as Emmanuel Aro (25) and Anu Olofinju (25) with a human skull along ijoun road in the Eggua area of Ogun State.   Emmanuel and Anu were arrested following a complaint by one Amoo Bankole who reported at the Eggua Police Station that the suspects were sighted digging at a cemetery where his mother was buried a few months ago. Amoo told the Police that with the digging of his mother’s grave, he believed the suspects were up to something evil. The spokesperson for the police, Abimbola Oyeyemi, who made this known on Sunday, October 6th in a release, stated that based on the complaint of Amoo, the Divisional Police Officer for Eggua division, Kehinde Oyekangun, mobilized detectives to the scene but met the suspects along the road. Abimbola added that the detectives accosted the suspects and upon searching their bag,  the skull of a woman was discovered inside.   According to the police, the complainant had identified the skull as that of his mother. Abimbola explained that when interrogated, the suspects confessed to the commission of the crime, admitting that they intended to use the skull for money-making ritual.   The police commissioner in the state, Bashir Makama, gave a directive that the suspects should be transferred to state criminal investigation and intelligence department for further investigation.The post Nigerian police arrest two young men for stealing human skull in Ogun State appeared first on Linda Ikeji Blog.