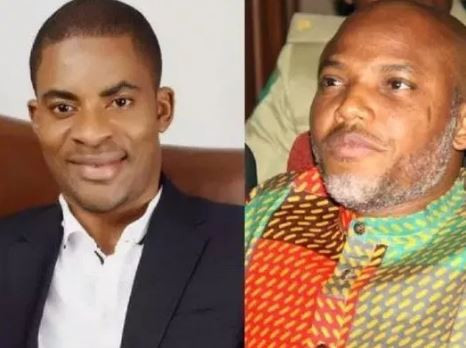 Human rights activist, Adeyanju Deji, has described as ‘senseless’ the order given to the proscribed Indigenous People of Biafra, IPOB, to attack President Buhari in Japan. Deji also described Nnamdi Kanu as a businessman who is sponsored by some elements in the North with the intention to ruin the Igbo race. Read his full statement below… Permit me to start with the words of Marthin Luther King: “In spite of temporary victories, violence never brings permanent peace. We adopt the means of nonviolence because our end is a community at peace with itself. We will try to persuade with our words, but if our words fail, we will try to persuade with our acts.”You have heard me say before and I will say again, Nnamdi Kanu is only a business man looking for where to collect money. He is not driven by ideology or love for the igbos. After attacking his fellow Igbo brother, Senator Ike Ekweremadu who played a significant role in ensuring his release from Kuje Prison in Germany, Kanu the businessman has called on some of his miscreants/supporters to attack President Buhari as he visits Japan.Those who were doubting me when I said Kanu is being sponsored by some element in the North can now see the clear handwriting on the wall. How can any reasonable person openly call for an attack on the president of a nation on foreign soil? Even if you don’t like Buhari or what he represents, at least we must respect the fact that he is the president of our country.Do you think Kanu does not know the danger of attacking Buhari in Japan. He knows but those sponsoring him are doing everything humanly possible to ensure no Igbo man ever rule Nigeria and also put peace loving igbos in the North in danger by setting them up for reprisal attacks by Buhari’s fanatical supporters.The other plot is also to use Kanu to divide igbos by creating an atmosphere of war. The plan of the sponsors of Kanu is to provoke the political leaders in the South East, i.e -governors and other elected officials to the point that they will have no other option but to orchestrate attacks against Kanu and his supporters in retaliation. Kanu only worships money and will not stop the verbal attacks on Igbo leaders in as much as his paymasters continue to send him alerts.- Comrade Deji AdeyanjuThe post Nnamdi Kanu is ‘senseless’ for planning to attack Buhari in Japan – Deji Adeyanju appeared first on Linda Ikeji Blog.