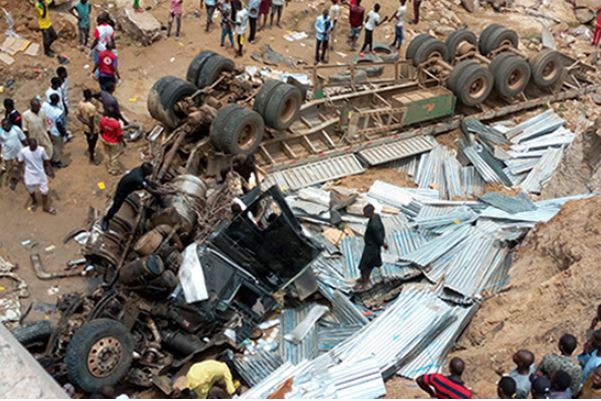 An accident involving multiple vehicles around the Bypass area of Gombe state has left six people dead. According to eye witnesses, an open truck said to belong to Dangote experienced brake failure, the truck was said to be conveying ceiling sheets. The truck was said to have rammed into other vehicles and in the process knocked them into a nearby canal.   An eyewitness, Julaibib Musa, who narrated how the incident played out said “the accident happened a few minutes ago. It was the Dangote truck that started brushing an 18-seater bus, with LAG Agege 814 plate number, with three passengers and tricycles into the canal.”   A survivor, who identified himself as Mubarak, a tricycle operator said, 'after dropping passengers, I tried to take a U-turn when I saw the truck approaching. Before I could do anything the truck was about to hit me, it was then I tried to divert my tricycle to avoid been crushed”.   The deputy commissioner of police DCP Nasiru Mohammed, who confirmed the accident said it is a terrible occurrence. “Well my men said about (6) six people were confirmed dead, while over ten (10) others are receiving treatment, so far”.     It will be recalled that this accident is the third within six months around the same spot. The first incident involved a truck conveying petroleum product to Biu, in Borno State, it claimed over ten lives and dozens were burnt beyond recognition, the second which claimed three lives was also conveying diesel to Biu. Rescue efforts were ongoing as of the time of filing this report by the joint effort of Police, FRSC, and Red cross.The post Photo: Fataltruck accident leaves six people dead in Gombe State appeared first on Linda Ikeji Blog.

A Nigerian doctor, Bright Oris, has shared the heartwarming story of how police officers found a newborn baby girl dumped inside of a dustbin and rushed her to the hospital where he works. According to him, the police officers attached to the Niger state police […]