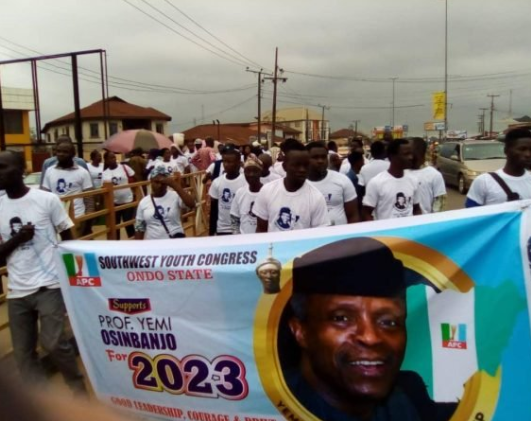 Co-ordinator of a youth group that organised a political rally for Vice President, Prof Yemi Osinbajo in Akure, Bamise Akintomide, has been arrested by the police in Ondo State, It was learnt that he is currently being detained at the Criminal and Investigation Bureau Department of the Ondo State Police Command headquarters in Akure, the capital. Akintomide was picked up for organising a rally in support of the Vice President. A source with knowledge of the incident said;“He (Akintomide) was arrested by the police. I cannot really say if he was directly picked up or invited for questioning. But I can confirm to you that he has been at the police headquarters in Akure since weekend and has been detained over there.  “I know his arrest must be connected with the rally he organised last week for Vice President, Osinbajo, at the APC secretariat. A day after he organised the rally, he received lots of strange calls asking him irrelevant questions.”Akintomide had on Thursday organised a rally for Osinbajo's candidacy by unveiling his 2023 presidential campaign poster and banner on the streets of Akure. Spokesperson for the APC in Ondo, Alex Kalejaye, said that the party had no link whatsoever to the group.The post Police arrest and detain organiser of ‘Osinbajo For 2023 President campaign in Ondo State appeared first on Linda Ikeji Blog.