Lami Phillips writes a note to women about tolerating nonsense

Lami Phillips Gbadamosi has written a short note to women to encourage them to “be kind” to themselves. The singer said that women have been taught to “be quiet” when mistreated and this has made them struggle with “self validation”. She called on women to […] 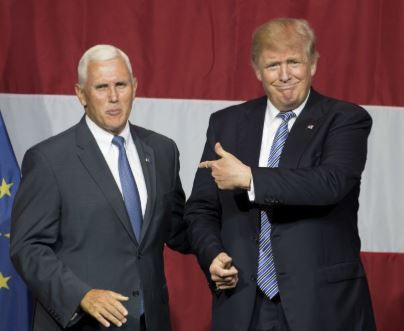 U.S. President Donald Trump on Sunday, August 18th said he would keep Vice President Mike Pence as his running mate when he seeks re-election in November 2020.   “I’m very happy with Mike Pence,” Trump, who is expected to easily win the Republican nomination for a second term, told reporters before boarding Air Force One in New Jersey. At the formal launch of his 2020 campaign, Donald Trump vowed to deliver another “earthquake at the ballot box” in 2020, speaking before 20,000 cheering supporters in Orlando, Florida.   The US president warned that “the swamp” he had vowed to drain during his 2016 campaign was “fighting back so viciously and violently” that he needed another four years in office.  Mr Trump boasted of his presidential achievements including creating a US economy that was “the envy of the world”, declaring: “The American dream is back.”   He also painted the Democratic Party, his political opponents, as “radical socialists”, warning: “They want to destroy you, they want to destroy our country as we know it.”  The rally in a key swing state was well received among supporters in the stadium, who cheered and jeered at Trump’s punch lines – including repeatedly booing the “fake news” media.The post President Trump confirms Mike Pence will be his running mate in 2020 appeared first on Linda Ikeji Blog.

A 4-month-old child who tested positive for Coronavirus in Kaduna state has been discharged after recovering from the disease.  The baby was one of the 20 COVID-19 cases that was recorded in the state on May 15. Kaduna state Commissioner for Health, Dr Amina Mohammed Baloni made the announcement on […]