Big Brother Naija 2019, Gedoni has landed a major deal as he was recently appointed by his State Governor, Ben Ayade as a Special Assistant for Garment Factory and Branding (probably the first ever heard). This appointment comes as a big win for Gedoni, who […] 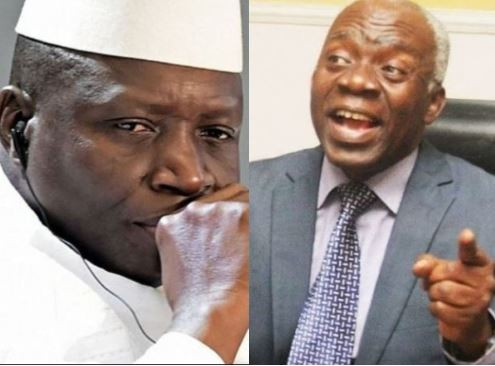 Human rights lawyer, Femi Falana says that in 2005 former President Yahya Jammeh of Gambia, ordered the illegal execution over fifty persons, including nine Nigerians.   According to a statement on Thursday, Falana said that on July 21, 2005, the Gambian Navy seized a boat conveying 58 immigrants, including 9 Nigerians, 40 Ghanaians, 3 Senegaleze, 3 Sierra Leoneans and 2 Togolese sailing towards a fishing vessel anchored on the high sea to stowaway to Europe.   Falana further revealed that two Ghanaian nationals were released to a Ghanaian Government Delegation, another Ghanaian escaped from the custody of the Navy and the remaining 55 immigrants were illegally executed on the orders of the “brutal regime of Mr. Yayah Jameh, former President of Gambia”. The human rights activist said his firm was able to establish the identity of one of the Nigerians said to have been executed. ”In the investigation conducted by our law firm into the killings it has been established that the 9 Nigerians involved were travelling with their passports. However, the Nigerian Community in Senegal confirmed the identity of one of the massacred Nigerian immigrants. The details are:-“Name:    Omozemoje Paul EnagamehPassport No:           A1548206Place of Birth:         LagosDate of Birth:           9th December 1976”While thanking the Minister of Foreign Affairs, Mr. Geoffrey Onyeama for providing vital information in the investigation, Mr Falana on behalf of his firm, stressed that the family members of the 9 Nigerians that were “illegally executed” have an opportunity to seek redress in the Truth, Reconciliation and Reparations Commission currently sitting in Banjil, the Gambia.The post PresidentYahya Jammeh ordered illegal execution of nine Nigerians in Gambia – Femi Falana alleges appeared first on Linda Ikeji Blog.

Turkey goalkeeper is sent off by referee after saving two penalties; the defender that replaces him saves third penalty (video)