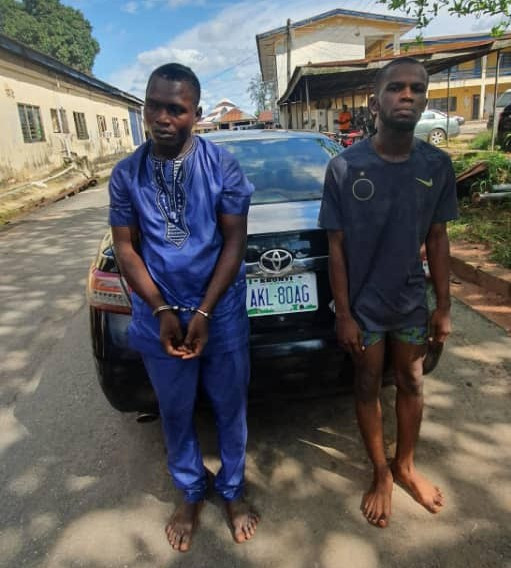 An Imo based Prophet, Michael Mbonu has been arrested by the Imo State Police Command's Special Anti-Robbery Squad operatives for allegedly kidnapping and killing his church member, Princewill Ezeji. The deceased said to be a graduate of Philosophy, had visited the Prophet for blessing after buying a new Toyota Camry car. He was however killed and dispossessed of the car by the cleric who was arrested alongside four others identified as Kingsley Udemba, 24, Nwogu Anslem  59, Blessing Michael, 25, and Chidinma Godwin, 27. Parading the suspects before newsmen, Imo state commissioner of police, Rabiu Ladodo said the arrest of the suspects came after Princewill's brother Emeka Ezeji reported the matter.  He said, “SARS operatives led by the commander, Godfrey Victor, swung into action on receipt of a complaint of a missing person.“Five persons were subsequently arrested. They are, Mbonu Michael, a 27-Year-old prophet, Kingsley Udemba, 24, Nwogu Anslem  59, Blessing Michael, 25, and Chidinma Godwin, 27.“It is important to note that on August 3, the deceased, Princewill Eleji, a graduate of Philosophy bought a Lexus vehicle and went to see his Prophet, Michael Mbuno.“From that date the victim was nowhere to be seen. While that was going on, one Kingsley Udemba, a close friend showed up and claimed that because the victim defrauded him was the reason he was missing.“The parents of the missing person had to raise N960,000 and paid Kinsley Udemba, yet the boy was not released. Upon investigation, and thorough digital analysis, though Kingsley collected the ransom as agreed but had no knowledge about the victim’s whereabouts.“The prophet, a family friend who was following the parents to look for Princewill was indicted. On interrogation, he confessed to the crime. He took operatives to see the decomposing corpse of the victim. The victim’s car, telephone and sim card were recovered. Charms, a Bible were also recovered.”The post Prophet kidnaps and kills his church member who bought a new car in Imo State appeared first on Linda Ikeji Blog.