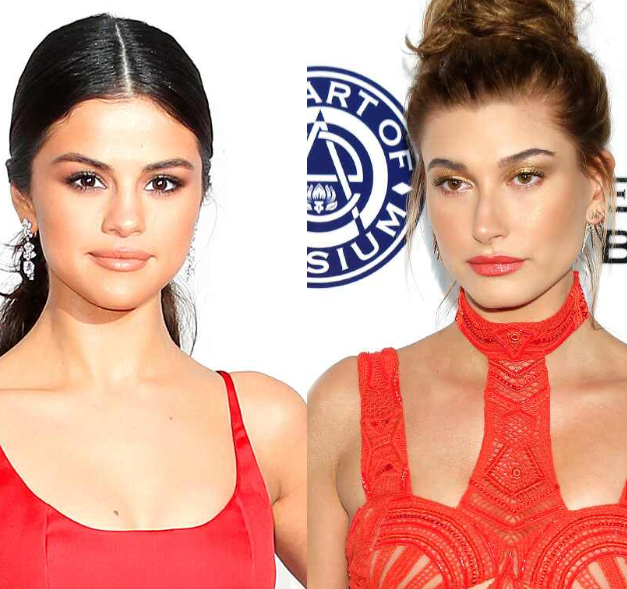 Selena Gomez just released the visual for her new song Lose You To Love Me, and her ex Justin Bieber's wife, Hailey Baldwin Bieber shared a post which people believe is a threat to kill Selena. Selena Gomez and Justin Bieber dated on and off for years (from 2009 – March 2018) before he got engaged to Hailey Baldwin in July 2018 and married her in September 2018. Following Justin's second wedding to Hailey, Selena released a video for her new track Lose You To Love Me. Viewers are convinced the song is a shade at ex Justin Bieber. In it, Selena sang about a man who promised her the world and she "fell for it" but he ended up not keeping his promise. Instead, he hurt her.  She also sang about being "replaced" in two months "like it was easy". This is believed to be a reference to how Justin quickly moved on to Hailey. In the song, she also shaded an ex for "singing off-key" in her chorus because it wasn't his song. While some fans say the ex in question is Justin Bieber, who featured on two of her tracks in 2013, others are claiming it’s the Weeknd. Only minutes after the video was released, Justin's wife, Hailey Baldwin Bieber took to her Instagram Stories to share a screenshot of Summer Walker’s "I’ll Kill You" playing on her phone. Instagram and Twitter users believe this is a threat directed at Selena for singing about her husband. 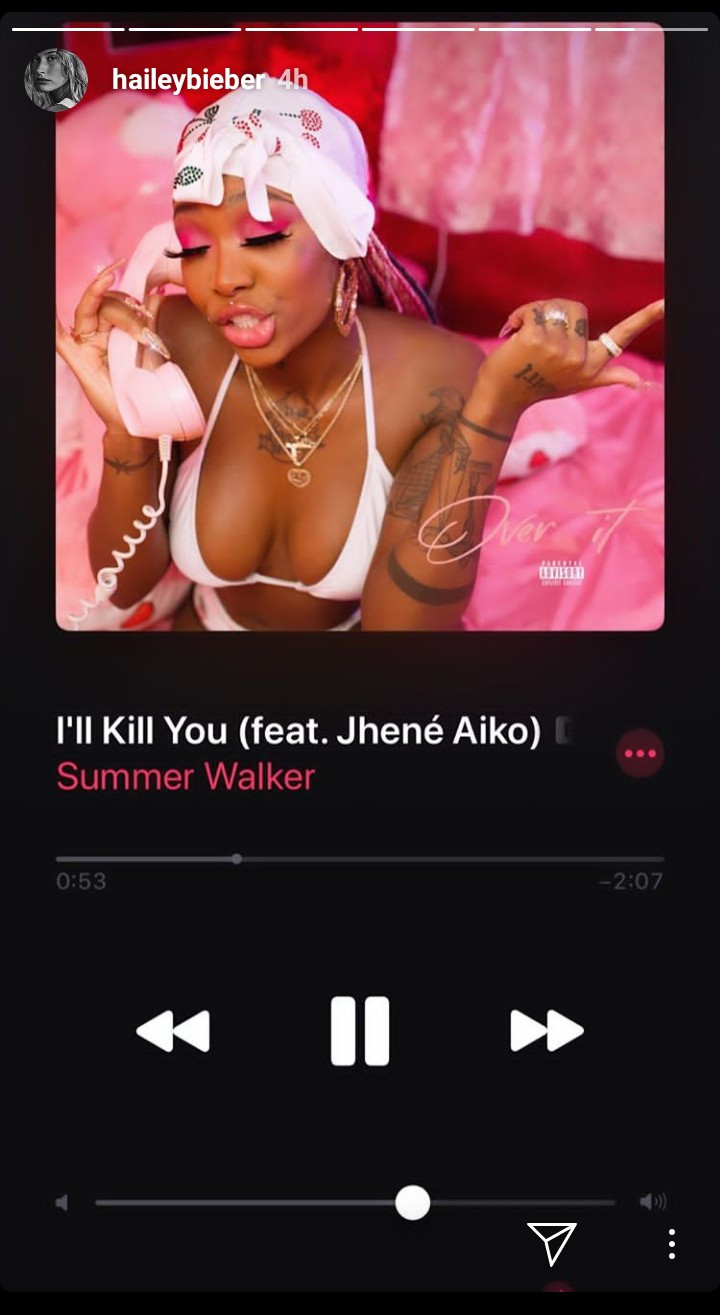 One Twitter user called out Hailey for the screenshot, writing: "The song been out 20 minutes and hailey already has something to say." 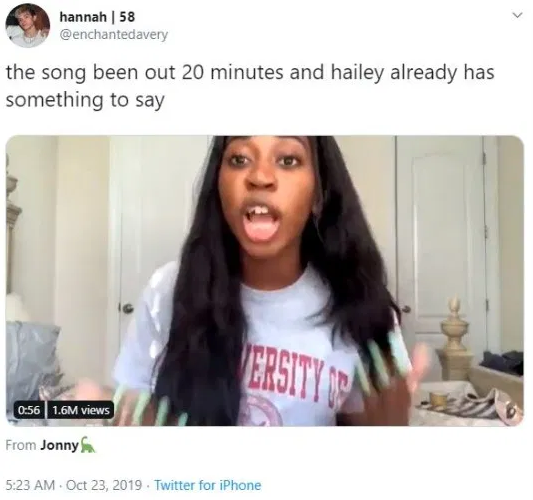 Another wrote: "I know hailey baldwin did not just jokingly threaten selena’s life when her husband is the f***ing idiot that ruined selena’s life for years." 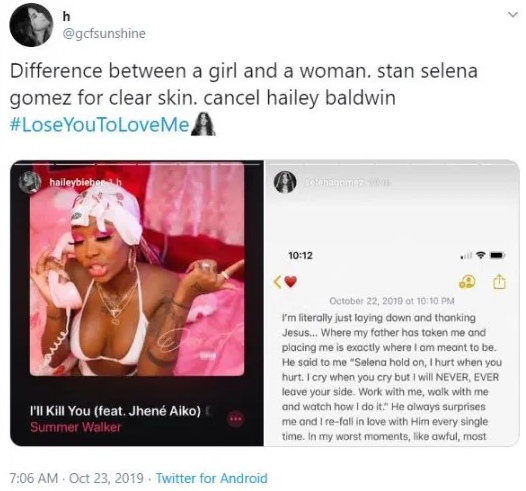 Another tweet reads: "Hailey is married with the man, and still insecure about Selena." 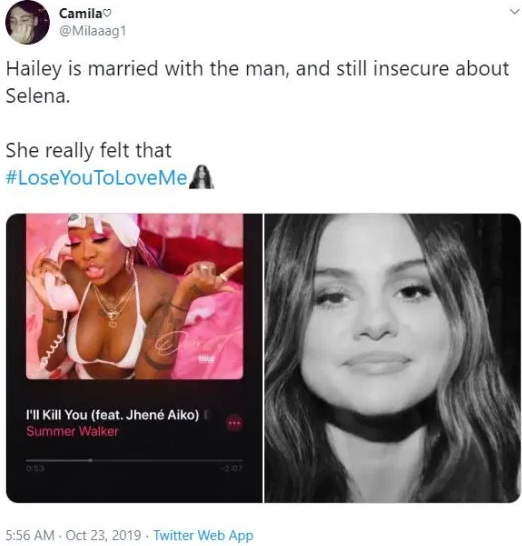 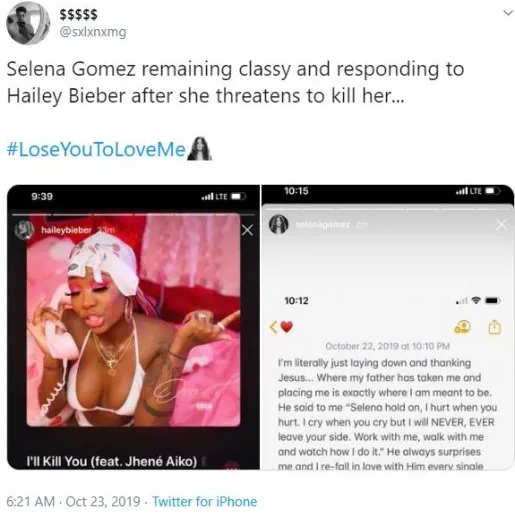 Following Hailey's supposed threat, Selena went on to share a message on Instagram about the "enemy trying to tear her down," which some are saying is referring to Hailey. Selena wrote: "I’m literally just laying down and thanking Jesus. Where my father has taken me and placing me is exactly where I am meant to be. "He said to me “Selena hold on, I hurt when you hurt. I cry when you cry but I will NEVER, EVER leave your side. Work with me, walk with me and watch how I do it". "He always surprises me and I re-fall in love with Him every single time. In my worst moments, like awful, my most painful moments – I never stopped falling to my knees wanting and needing only His love. "See the enemy keeps trying to tear me down and it’s not gonna happen. Not today. Not the next…" 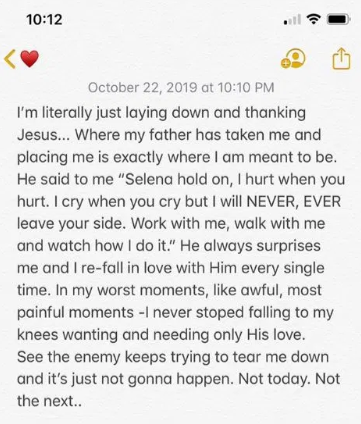 Hailey used to be a fan of Selena and Justin Bieber's relationship (Jelena) and used to tweet her support for them. See some of her old tweets below.

The post Selena Gomez fans are convinced Hailey Baldwin threatened to kill her after she released visual for new song Lose You To Love Me appeared first on Linda Ikeji Blog.