Popular Nigerian Singer, D’banj has taken delivery of a brand new whip he acquired for his beautiful wife, Lineo Didi Kilgrow. The couple who welcomed a newborn boy on 19 September 2019, have been keeping their private lives off social media for a while but […]

Season 4 Big Brother Nigeria winner, Mercy Eke also known as Mercy Lambo has come out to advise her numerous fans about envy and jealousy. The reality TV star described the duo as a killer. She then advised them not to envy successful people but […] 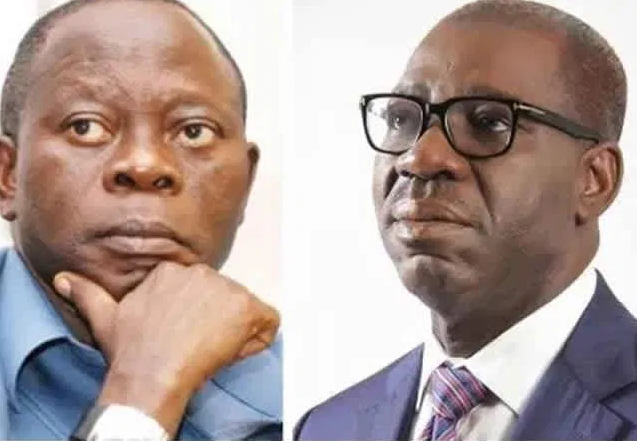 Adams Oshiomhole, the National Chairman, All Progressives Congress (APC) has warned Governor Godwin Obaseki of Edo State to stop blackmailing him and rather focus on delivery of good governance to the people.   This was contained in a statement signed by Oshiohmole’s Chief Press Secretary, Simon Ebegbulem, in Abuja on Tuesday, October 15th.  The National Chairman of the ruling party insisted that he was attacked at his residence in Benin on October 12 but Obaseki in a statement issued in Abuja by his Special Adviser on Media, Crusoe Osagie, said that Oshiomhole was never attacked in the state.Oshiomhole said:“We have it on good authority that the governor (Obaseki) intends to create disaffection and crisis in the state, APC and probably dump the party for another party. That is why, he has embarked on this blackmail which Edo people will resist.So, he should stop blackmailing me and face governance which is why Edo people voted him into power. We are even more scared now that the governor is making every effort to coerce me into giving him details of my movement in Edo State. Who knows what he is plotting again. But every evil plot against me will fail.” He alleged that the last Saturday’s siege at his residence by Obaseki’s thugs was a good example.“Before that incident, state government-sponsored thugs have been harassing, intimidating APC members across the 18 Local Government Areas (LGAs) of the state because APC leaders refused to adopt his second term aspiration. People are being sacked in their jobs every day in the state,” he said.It would be recalled that Obaseki said that Oshiomhole was never attacked in the state as being alleged. “We have no knowledge of alleged attack on the residence of the APC National Chairman based on a report we received from the State Commissioner of Police, DanMallam Muhammed,” Obaseki said.   He said that the former governor did not inform his office, Commissioner of Police or State Director of the Department of State Service (DSS) for security while on visit to the state.   According to him,'if our party’s National chairman do the needful while visiting the state, there would be less acrimony. 'He urged Oshiomhole, government functionaries and political office holders to observe protocols while visiting the state. This, he said, would ensure their security and guard against unjust attack.The post Stop blackmailing me – Adams Oshiomhole warns Governor Obaseki appeared first on Linda Ikeji Blog.

Popular Nigerian singer, Oladapo Daniel Oyebanjo, better known as D’banj, decided to spoil his beautiful wife, Lineo Didi Kilgrow. Lineo took to her Instagram story on Friday to show off the luxurious automobile which had no plate number. The singer’s wife uploaded a boomerang video […]

The Lagos State government has started a downward review of the 2020 budget due to the adverse effects the COVID-19 pandemic has had on the economy. The Commissioner for Economic Planning and Budget in Lagos, Sam Egube, disclosed this on Thursday, May 21. He said that the review, approved by […]