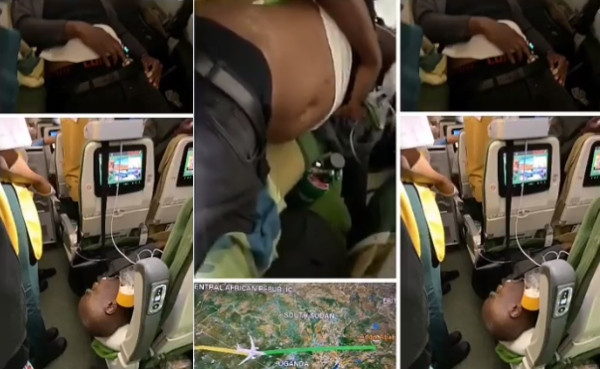 Two Nigerian men identified as Chigozie Pascal Aniagbado and Chijioke Chidioka Ogbuefi, met their untimely death after the drug they swallowed burst open in their stomach during a flight from Brazil to Ethiopia. Despite being placed on oxygen during the 12-hour flight, the drug mules died before an emergency landing could be conducted. According to an eyewitness, they couldn't land in the nearest country because it had ebola.  An eyewitness wrote;  Just IN:: At this moment am in ethopian Airline from Brazil to Ethiopia my sit number is 30D which falls at the middle in between two men ,they are all black skin like me ……,The flight was 12hrs journey ,the young man at my right ask me to check the flight  map to know how far we have gone which I did we already half the journey ……Then he said to me do you speak Igbo I said yes ,he said he doesn’t know if he will make this journey that it seems the drugs he swallowed must have expired its stay in his system ,then my mind sink right inside my stomach ,I began to shiver ,he said don’t be scared it’s not in the bag is inside my body ….he said I should stand and get him drinking waterI refuse standing cos I was scared he may insert something in my bag ,I have to wave for the air hostess to come ,she came and serve him water ,he demands for food ,he was given …..he became calm ,few minutes later he brought an olive oil from his bag and drink ………This moment I was confused I don’t know what to do ,then he started shivering /panicked & fell down that was when all the doctors in the plane assembled,questioning ,asking his country & tribe ,his blood was tested for sugar samples & high blood pressure…..he was able to open that he swallowed drugs.As I speak his vomiting blood ,my God I don’t know what will lead a young strong man to this ,as I type now his gasping out the doctors has to put him on oxygen ,his progress is slow ,His name is CHIGOZIE PASCAL ANIAGBADO, We just discovered another person is behaving same way why ?why brining shame to the hard working other Nigerians?His name CHIJIOKE CHIDIOKA OGBUEFI …..Because of them we are having emergency landing ,the pilots said no matter their crime ,it’s their priority to keep them aliveWe couldn’t land the said country has Ebola ,so we proceed while they are on oxygen….. One if men is the son of of Best biscuits and he lost is father last year. While typing, I was told they had lost the battle. May their soul rest in piece Watch the video below…      View this post on Instagram         Two Nigerian men, Chigozie Pascal Aniagbado and Chijioke Chidioka Ogbuefi die after drug they swallowed burst open during a flight from #Ethiopia to #BrazilA post shared by Lindaikejiblog (@lindaikejiblogofficial) on Sep 15, 2019 at 12:27pm PDTThe post Two Nigerian men die after drug they swallowed burst open in their stomach during a flight (video) appeared first on Linda Ikeji Blog.