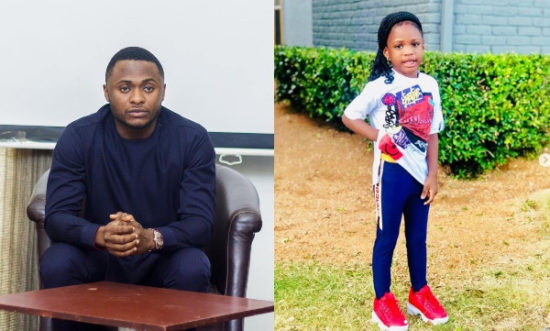 Ubi Franklin celebrated his daughter, Zaneta on her birthday today August 30 with some very deep words.

The music label boss poured out anguish on the ‘gram on his emotions while having to live with three women, which excludes his fourth babymama  Sandra.

He opened up on how he hustled and worked hard to be a great dad while also stating that he won’t wish his enemy to be in his shoes because he has to live with emotions of three different women.

Sharing a beautiful photo of his daughter in celebration of her fourth birthday, he stated that Zaneta’s mother deserves a medal for playing her role as a mother and also some of his as a father.

Ubi further revealed that he is still searching for the best formula of being a good father as he wouldn’t wish his enemy his current state of living with the emotions of three women.

It’s been four years already my little smart and energetic zee mama.
Last four year has been about your mum and she really deserves an award for everything she has been doing and if we have to share responsibility she has done 50% of mine and adding to 100% she brings to the table.
THE PURPOSE OF GOD WILL NOT BE VOIDED BECAUSE OF FEELINGS OF MEN.

The world may have a different view of how I have had you and your two brothers and in my heard I am wondering the best formula to live well in life and be a good father.

Many are in unhappy marriages and many fathers don’t even take care of their kids who live with them in the same house. Many fathers don’t even take responsibility for their children or even try to have a cordial relationship with their mothers, here am I doing all round to make sure you and your brothers live well,and we still have people who think I have committed an abomination for taking care of my kids and playing my role as a father and a very good one at that.

This is not an excuse for anyone reading this, I won’t wish my enemy to be in my shoes because I have to live with emotions of three different women (happy/sad).

This has taught me more patience, makes me double up the hustle to give all my Three kids a happy life and that’s my priority now and I don’t think there is a better way for a father to act” he wrote.

Ubi Franklin prayed that his daughter becomes a better woman and also play the role of a big sister to her brothers perfectly. He also revealed that she took his trait of not liking food.

“My daughter you will become a better woman from the way you talk and how energetic you are I have no doubt you will make a big sister to your brothers and will always make me proud in everything in life.
You will excel in your academics, and when you grow old enough to read this, one thing is important and that is people will always want to confine you to live a certain way while covering their own sin to make your look so bad.

Everyone reading this has something they are hiding and will sit on social media to troll others and that’s the sad world we live in now where we cover up our own and talk about others.

One thing you took form me is, we don’t like food .
Your emotions grew right alongside of you this year. While they are big and overwhelming at times, they are letting us get an even bigger sneak peek into the person you are” he added. 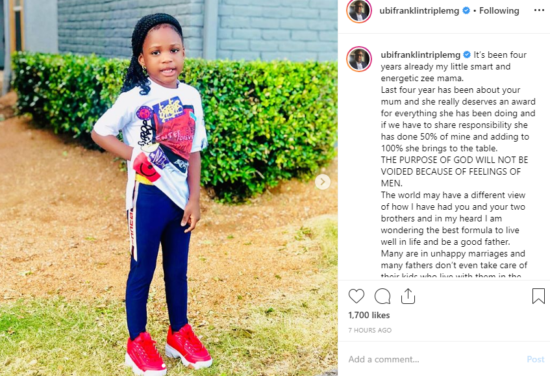 The post Ubi Franklin opens up on anguish of living with the emotions of three women appeared first on .

If your relationship with your partner is transactional, he’s your customer not boyfriend – Reno Omokri

Popular Nigerian author snd social media commentator, Reno Omokri, has dropped another nugget for his fans and followers on social media. If your relationship with your partner is transactional, he’s your customer not boyfriend – Reno Omokri The author shared his thought on the injustice […]

Popular socialite, Cubana Chief Priest has reacted to the recent social media campaign which has seen many people including the rich and famous being called out for rape.  In his Instagram post, the club manager stated that rape victims who wait for a rapist to get rich […]